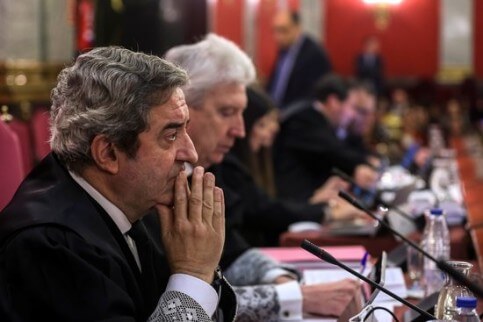 On the second day of the Catalan trial, a Spanish public prosecutor today accused Catalan independence leaders of trying to use ‘human shields’ to block police during their failed secession bid in 2017.

Supreme Court prosecutor Fidel Cadena also rejected arguments by defence lawyers who said the trial was politically motivated, saying ‘anyone can have the ideas they want’.

‘What is penalised … is behaviour carried out over time which aimed … at the subversion and rupture of the constitutional order, calling for violent methods through the use of the masses as human shields’ against police, he said.

Twelve Catalan independence politicians and activists face years behind bars if they are convicted of rebellion or other charges for pushing an independence referendum in October 2017, in defiance of a court ban, and a brief declaration of independence.

Under Spanish law, rebellion is defined as ‘rising up in a violent and public manner’. But the key, divisive question is whether there was any violence.

Prosecutors point to ‘violent incidents’ during protests orchestrated by two grassroots groups in the lead up to the referendum.

Activists surrounded a Catalan economy ministry building on 20 September 2017 while national police carried out a search inside to try to stop the vote from going ahead.

At least three police vehicles were vandalised and their occupants forced to flee into the building, where for hours a group of police officers remained trapped by the crowds outside.

Prosecutors also accuse the separatists of fostering ‘acts of violence and aggression against police officers’ on the day of the referendum.

Supporters of independence deny the accusation of violence. They instead condemn a police operation to shut down the referendum, which saw voters beaten with batons and dragged away from polling stations, images of which were seen around the world.

Another public prosecutor, Javier Zaragoza, accused the defence of wanting to ‘create a deformed version of reality to discredit Spanish justice’.

‘It is not separatism which is being tried … but the series of events which took place in September and October 2017,’ he added.

‘Political activity is not a licence which justifies carrying out criminal actions,’ like ignoring the ban of the referendum by the Constitutional court, he said.

‘I don’t think the responsibility for the violence on referendum day can be attributed to Spain’s law enforcement, but to those who, knowing the law, mobilized thousands of citizens,’ prosecutor Javier Zaragoza also said. ‘They acted as human walls impeding the legitimate police operation.’

The Supreme Court turned down a petition by prosecutors representing far-right Vox party, who denounced that one of the defendants was wearing a yellow ribbon – a symbol in support of jailed pro-independence leaders.

‘One of the accused is wearing what seems to be a yellow ribbon, a politically charged symbol,’ said Pedro Fernández, Vox’s lawyer. He asked the ribbon be removed from the courtroom ‘over the due respect for justice’.

In response, the courtroom’s president, Manuel Marchena, stressed that defendants would not be prevented from using ‘ideological symbols’, invoking a ruling by the European Court of Human Rights.

Once the defence teams and the prosecutors have spoken on the first two days of the Catalan trial, pro-independence leaders themselves are expected to offer their testimony.

The trial will resume on Thursday when the main protagonist, former Catalan regional vice president Oriol Junqueras, is set to take the stand. He faces up to 25 years in jail.

The 11 other accused include members of Catalonia’s then executive, the two leaders of powerful pro-independence associations, ANC and Omnium Cultural, and the former president of the Catalan parliament. They face jail terms of seven to 17 years.

Nine defendants have been charged with rebellion, with some also accused of misuse of public funds. They have all been in pre-trial detention for months, some of them for more than a year.

Carles Puigdemont, Catalonia’s former president who fled Spain days after the independence declaration on 27 October, is not among the defendants. Spain does not try suspects in absentia for major offences.