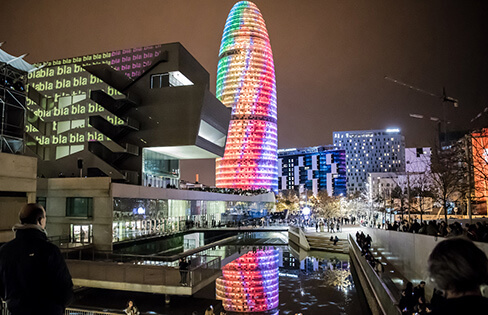 Santa Eulàlia is one of Barcelona’s two patron saints and her feast day on 12 February provides the city with the opportunity to hold a winter festival full of culture and tradition.

The event is split into two parts: the Festes de Santa Eulàlia from 8 to 12 February, and a festival of light, Llums BCN, which is held the following weekend.

The Festes feature a full programme of Catalan culture including parades of gegants (large figures with papier-mâché heads and wearing traditional outfits, and others that represent fantastical creatures), correfocs (a firework party with a difference that sees demons carry sticks loaded with firecrackers as they dance through the streets), and castellers (human towers where members of trained groups climb on top of each others’ shoulders to build the tallest ‘castles’ they can).

Many city museums open their doors for free on one day during the festivities and special activities are laid on in numerous venues.

The festival of light is focused in the neighbourhood of Poblenou and includes a range of installations created by artists, designers and architects from around the world. All the pieces explore the possibilities offered when combining urban spaces and dynamic light sources.

Santa Eulàlia was a Christian who lived in Roman Barcelona around the end of the 3rd century.

She was martyred aged just 13 during a period of persecution of Christians by the emperor Diocletian.

When Eulàlia refused to recant her religion, she was subject to 13 different tortures that ended with her decapitation.

Today, the cloister of the Cathedral of Santa Eulàlia is home to 13 geese in remembrance of the girl.

Barcelona celebrates science in the city