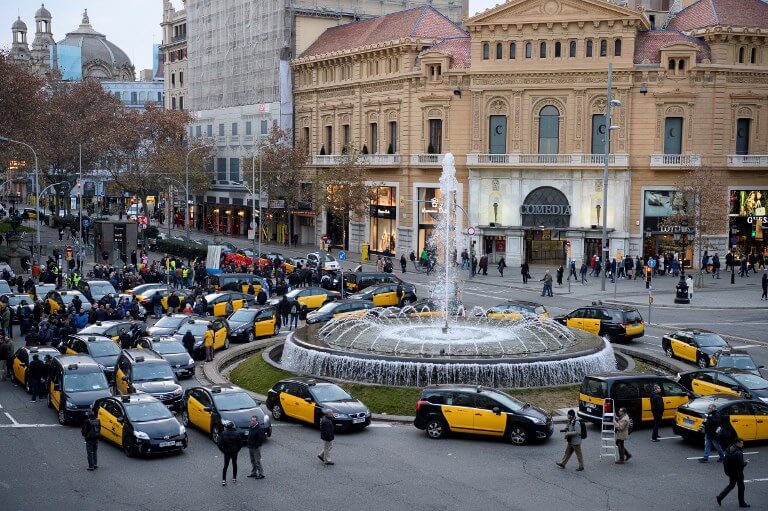 Dozens of taxis in Barcelona have started an indefinite strike, and on Friday blocked the major Gran Via thoroughfare in protest against online ride-hailing services like Uber and Cabify.

The mobilisation comes ahead of a similar work stoppage due to kick off on Monday in Madrid just two days before the Fitur International Tourism Fair, one of the world’s largest, kicks off in the Spanish capital.

‘From now, us taxis will go on strike indefinitely in the Gran Via,’ a street that crosses Barcelona, federation Elite Taxi said in a statement.

On Friday afternoon, dozens of cars were blocking the street that had already been occupied over the summer by taxis in another protest that then spread to other cities.

Three people were later arrested for disorderly conduct and damages after they tried to block another central street with containers, the Catalonia police said on Twitter.

A VTC car was vandalised by a group of individuals and its driver taken to hospital after suffering a panic attack, the emergency services said.

The strike follows new regulations unveiled Friday by the regional government of Catalonia that force clients to book VTCs (Tourism Vehicles with Chauffeur) like Uber or Cabify at least 15 minutes before the actual time they are needed.

Taxis though argue that VTCs are not a taxi service by law and should therefore be booked 12 to 24 hours ahead of time.

‘We want them to differentiate both services and the only way to do so is via pre-booking,’ said Luis Berbel, head of the Taxi Union of Catalonia.

‘Fifteen minutes is nothing, it’s an insult to the sector.’