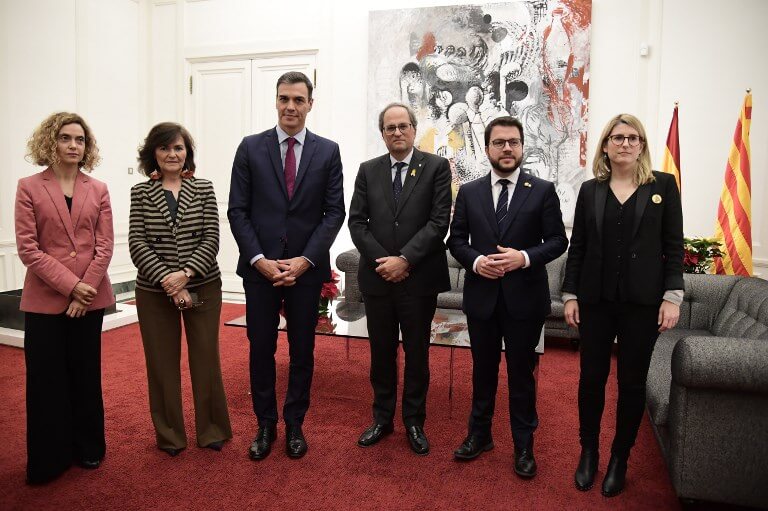 Despite mutual distrust and radically opposed positions on Catalonia’s right to self-determination, the Socialist executive and the regional government continue to meet to try to re-build ties broken in a secession attempt in October 2017.

Afterwards, a short joint statement declared they had broached the possibility ‘of establishing two differentiated dialogue spaces – one between governments … and another between (Catalan) parties,’ adding the exact parameters are still to be determined.

The meeting comes close to a month after Sánchez, who took office last June, met with Catalan leader Quim Torra on 20 December in Barcelona.

On that occasion they agreed to maintain ‘an effective dialogue which will lead to a political proposal which has widespread support among Catalan society’.

Thursday’s meeting comes as Spain’s minority government wants to pass its 2019 draft budget through parliament, where it only has 84 lawmakers out of 350.

As a result, it needs the support of Catalan pro-independence lawmakers who in return are asking for a solution to the crisis gripping the region since a banned secession referendum in 2017 prompted a short-lived declaration of independence. After that, Catalan leaders were either arrested or moved abroad.

Those who were held are due to stand trial at the end of the month or early February in what could put ties between Madrid and the Catalan government to the test.

Pro-independence leaders in Catalonia are also angry over the detention Wednesday of 13 activists and pro-independence mayors, as well as one journalist, for cutting off a high-speed rail line on the anniversary of the independence referendum on 1 October 2018.

The Catalan government has announced it will ‘file a complaint against the police actions’ saying the detentions are illegal as they were not ordered by a court.

‘There is little likelihood that the draft budget will go through,’ Artadi warned on Tuesday.

Sánchez took office in June after winning a surprise vote of no-confidence against the previous conservative government with the support of Catalan pro-independence parties.

He has adopted a more conciliatory tone towards Catalonia than his conservative predecessor, but there is little progress over the region’s desire for self-determination.