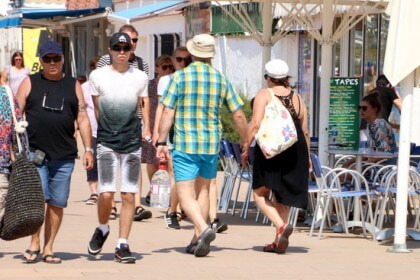 On Wednesday, the Spanish government had stressed 2018 had been another record year in terms of foreign visitor numbers, which reached 82.6 million.

Tourism is of major importance to Spain. It represented 11.8% of its GDP last year, according to Exceltur data.

But while visitor numbers rose, there was a drop in overnight stays in classic sun and beach destinations like the Canary Islands or southern Andalusia as competitor countries who had been blighted by attacks and political instability recovered.

‘Our sun and beach competitors (Egypt, Turkey and Tunisia) in 2018 recovered 12.5 million tourists which is a strong increase in competition’ in a sector where many customers look for bargains, Exceltur vice-president Jose Luis Zoreda told reporters.

The group said overnight stays in Spain by traditional visitors from Germany, Britain, Italy or France had dropped.

But a rise in long-distance flight connections had attracted more people from the Middle East, United States, China, Japan and other nations who tend to spend more, helping make up the shortfall to an extent.

Zoreda warned that 2019 is also expected to see a ‘slight deceleration’ in the sector.

He pointed to the continued recovery of competitors as well as ‘volatility’ factors such as Britain’s exit from the European Union, which is currently in limbo.

‘We must be well prepared if a hard Brexit happens,’ Zoreda said, referring to the doomsday scenario in which Britain exits the EU without a deal negotiated by both sides.

But he said the big challenge was not to attract tourists in their droves but rather those who spend more.

Madrid taxis to strike ahead of global tourism fair