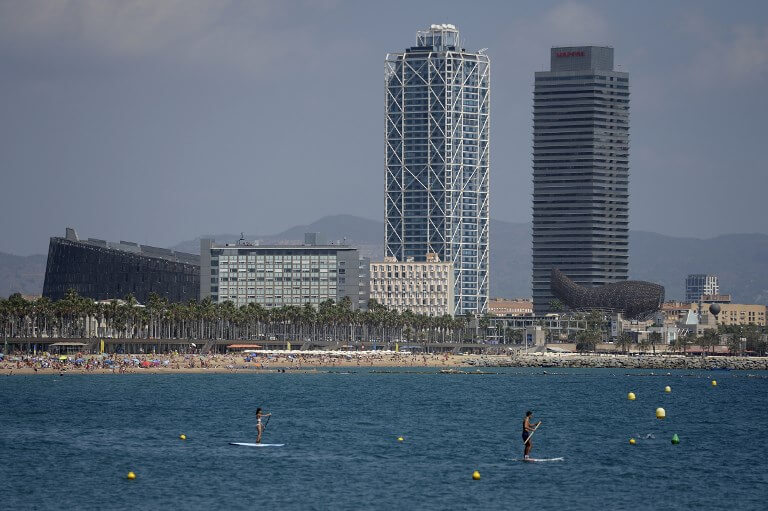 On the sun-drenched eastern coast of Spain where British pensioners and business-owners are uncertain for their futures as Brexit ticks closer, the crushing parliamentary defeat of Theresa May’s EU divorce deal has sparked a glimmer of hope.

‘This might not happen,’ Lyle Starritt told the AFP news agency, the day after May suffered a historic drubbing in the House of Commons on Tuesday, when MPs rejected the deal she struck with the European Union.

Britons interviewed by AFP, all of whom were keen on Britain staying in the EU, also said they were confident that even if Brexit takes place Madrid would preserve their rights, providing London reciprocates for Spaniards living in Britain.

Starritt, who runs an estate agency just a stone’s throw away from the wide, palm tree-lined beach in the coastal town of Javea, said that many British expats had been gripped by a ‘sense of gloom’ after the 2016 referendum to leave the bloc.

Spain is the number one destination for British nationals living outside Britain, far ahead of France and Ireland. These include retirees aged over 65 who have made the country their permanent home.

ALSO READ: Post-Brexit no-deal era: will native English teachers from the UK have to leave Spain?

With no deal yet agreed for the terms of Britain’s exit from the EU at the end of March, many expats are concerned about freedom of movement, pensions and healthcare.

But Starritt, 58, said the collapse of May’s deal had given people some confidence that the entire Brexit process could be halted.

‘There is a sense of possible optimism that we’re going to get out of this,’ he told AFP, echoing comments by other expats AFP spoke to.

Britain’s House of Commons lower house voted 432 to 202 against May’s plan for Brexit on Tuesday, the biggest government defeat in modern British history.

The defeat has raised the spectre of a doomsday no-deal exit from the EU.

But many shrugged off this fear, hopeful that it could open the way for a second referendum – even though many Britons in Spain were excluded from the last vote because of rules barring those who had lived abroad for long periods.

‘It’s not a concern of mine because I have never believed … that no-deal is possible,’ said Sue Wilson, chairwoman of the Bremain in Spain group that campaigns against Brexit.

Britons now account for some 29% of Javea’s 27,000-strong population, according to Scottish pensioner George Thomas, head of the local branch of the Spanish Socialist party.

He said authorities in the Valencia region were ‘aware of the importance to the economy of all the resident Brits’.

‘It would be disastrous if there were conditions imposed that led to a mass exodus,’ the 77-year-old said, standing just feet away from the beachfront Chabada bar where mainly English-speaking elderly customers were eating breakfast.

‘So many Brits live here, spending their pension, running businesses.’

Still he has applied for a Spanish passport, just in case.

Not as nervous as before

Starritt, who has been in Spain for two decades and runs a real estate agency and a property maintenance firm in Javea, is from northern Ireland and has applied for an Irish passport.

Ten years ago, around 80% of his customers were British but last year, he sold just two properties to British people buying with pounds, he says. Other nationalities have made up some of the shortfall.

‘We will probably stay flat in relation to British buyers for a long time to come’ if Brexit happens, he says.

‘If Brexit doesn’t happen, there will be an upsurge.’

Officially, just under 241,000 Britons are registered as residing in Spain, but many have not signed up officially and it is estimated up to 800,000 live in the country.

Among the younger Britons who work ‘the big concern is freedom of movement,’ says Wilson.

‘If you live in Spain, you wouldn’t have that freedom to go live or work in France or Germany.’

For retirees there is uncertainty over the payment of their pensions, which currently rise every year for those living in EU countries.

Around 50 kilometres south of Javea lies the resort of Benidorm, a town of high-rises where pubs and English ads for mobility scooters for the elderly abound.

Steve Young, a 66-year-old British pensioner, has stopped off at Kazal’s Bar after a round of golf.

The former industrial refrigeration engineer has lived in the nearby town of El Campello since 2015 and said several of his golfing friends voted to leave the EU.

He is cautiously optimistic after May’s defeat.

‘I feel a little bit nervous but I’m not as worried as I was,’ he said outside the bar, where a sign advertises karaoke.

‘The Spanish government seems to think that the British people in Spain have something to offer.’