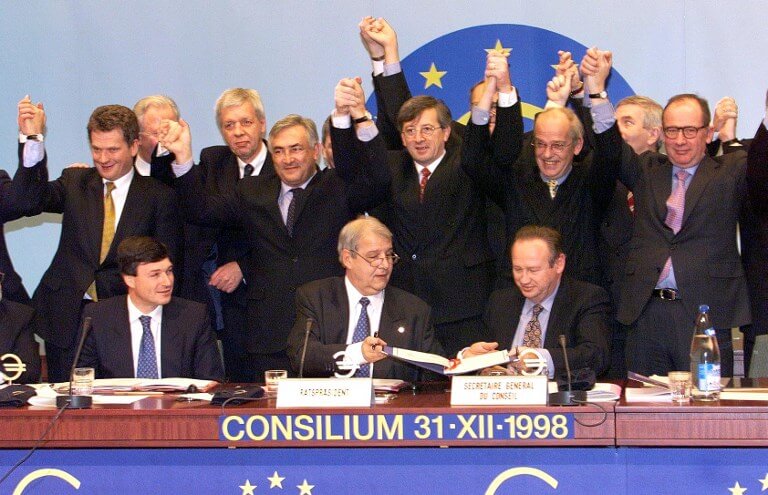 The euro turns 20 in 2019, after two tumultuous decades that saw the single currency survive a make-or-break crisis and become a fixture on the financial markets and in Europeans’ wallets.

The euro was launched on 1 January 1999, at first only for accounting and financial transactions, and then three years later as notes and coins.

Here is a recap of defining moments for the currency, which was envisaged in the European Union’s Maastricht Treaty:

Tens of thousands of people in banks and European stock exchanges get to work over the New Year break to ensure everything is ready when financial markets reopen on 4 January.

Shops that displayed prices in both currencies with approximate exchange rates update their tags.

The new money can be used for bank transfers along with payments by cheque, traveller’s cheque and bank card.

Monday, 4 January is the euro’s baptism on foreign exchange markets. One euro initially trades for more than $1.18. But weeks later it slides to less than a dollar and at the end of October it hits its lowest rate ever, at $0.8230.

On 1 January 2001 Greece becomes the 12th country to adopt the single currency.

On 1 January 2002 the euro becomes physical legal tender as some 15 billion notes and more than 50 billion coins are put into circulation, shaking up the lives of 304 million Europeans.

People familiarise themselves with the single currency, sometimes using pocket calculators to make it easier to work out conversions.

Unlike most currencies, the euro notes show no national symbols, opting instead for bridges and windows.

A period of two legal tenders being in circulation in each country begins as the national currencies are gradually phased out, lasting until 1 March.

On 15 July the euro reaches parity with the dollar again.

In 2003 Sweden, in a referendum, joins Denmark and Britain in rejecting the single currency.

On 15 July 2008 the euro reaches an exchange rate high, trading at $1.6038 as the United States is rocked by the subprime mortgage crisis. That November, however, the eurozone enters a recession lasting a year.

In 2010 the EU is mired in a debt crisis. In May the EU and International Monetary Fund (IMF) provide a 110-billion-euro bailout for Greece, which in turn commits to a severe austerity plan. A month later the euro plunges below $1.20.

In November, Ireland, where banks are crippled by debt, also obtains an EU-IMF bailout plan of 85 billion euros.

Portugal obtains a 78-billion-euro bailout in May 2011.

On 25 July 2012 Spain’s long-term interest rate soars above 7.6%, sparking fears of a euro collapse. A day later European Central Bank chief Mario Draghi promises to do ‘whatever it takes to preserve the euro’.

In August, in one week, the ECB buys back bonds of eurozone nations worth 22 billion euros to support Italy and Spain.

The EU agrees in October to cancel a part of the Greek debt and to extend a new set of loans.

In May 2014 the single currency rises near $1.40, hitting exports. Then months later it comes close to $1.05 in a slide that is linked to the buying of assets by the ECB to support the economy.

In July the next year Greece obtains a third bailout aimed at keeping it from crashing out of the eurozone, or ‘Grexit’.

In 2016 the ECB says it plans to stop issuing the 500-euro note by the end of 2018. The banknote is known as the ‘Bin Laden’ and believed to be favoured by criminals for money laundering and terrorist financing.