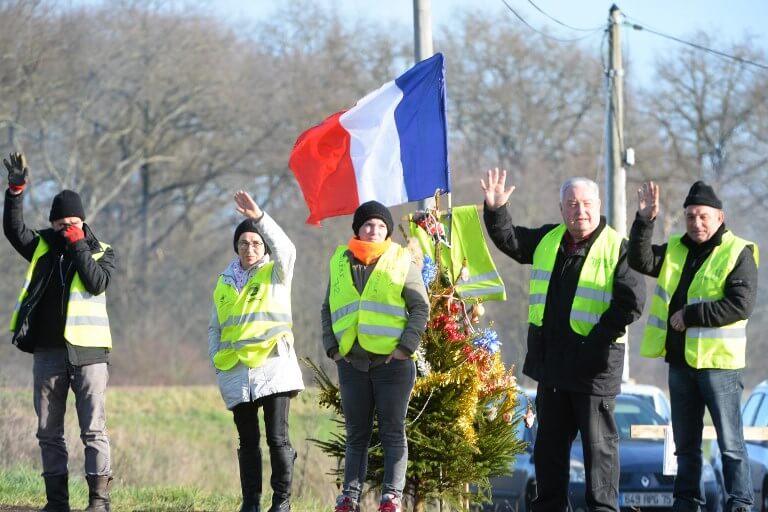 Anti-government protests which have rocked France over the past month eased notably over the weekend, after the government offered a range of concessions to ease the anger over declining living standards for people already struggling to make ends meet.

Many of the ‘yellow vest’ protestors have nonetheless vowed to keep up the pressure, hoping their movement will become a more permanent fixture of the French political landscape.

Here are four scenarios for the grassroots movement which sprang up on social media last October.

With European Parliament elections bearing down in just five months, some of the yellow vests want to fuse the protestors into a cohesive grouping to take on established parties.

An IFOP poll released on 9 December found that a ‘yellow vest’ list would garner 12% in the EU Parliament vote in May, compared with the 21% credited to the centrist list led by President Emmanuel Macron’s Republic on the Move (LREM) party.

But that would still put it in third place, just behind the 14% score for the far-right National Rally in the survey, and ahead of the far-left France Unbowed party at 9%.

A new party, advocates say, would enshrine the movement’s independence while siphoning off voters from parties on both the right and left.

It could find inspiration in Italy’s anti-establishment Five Star movement, which burst onto the scene in the late 2000s, or Spain’s leftist party Podemos.

‘It will let us penetrate the political sphere and give the base a voice, about what’s happening for those at the bottom,’ said Jacline Mouraud, whose popular YouTube tirade against Macron’s policies helped galvanise the yellow vests into action.

‘Without a structure, we’ll never be heard,’ she told Franceinfo TV last week.

France’s traditional parties, trying to regain their footing after being swept aside in Macron’s march to the presidency last year, are hoping to tap into the yellow vest anger against the former investment banker.

Leaders from across the spectrum have backed their demands and held talks with yellow vest delegations.

‘We’re in a race with the far right … to be the political instrument of this popular anger,’ the far-left France Unbowed lawmaker Alexis Corbiere told LFI radio on Monday.

‘The political landscape is not as set in stone as some pretend,’ he said.

On the far right, National Rally chief Marine Le Pen has also presented her party as the longstanding expression of many yellow vest demands, in particular their call for citizen-driven referendums.

But calls to transform the movement into a more structured political force are being resisted by some members, especially those manning barricades at roundabouts and motorways.

They rail in particular against Macron, whom they accuse of catering only to Parisian elites who don’t understand the daily struggles in rural and small-town France.

Many believe it’s their spontaneous actions which forced the government to back down on fuel tax hikes – a core demand of drivers who said they were paying the price of France’s clean-energy push – and make other concessions.

Some yellow vests argue that by staying true to their roots, they will retain their broad popular support during the three-month consultation on other potential reforms, including Swiss-style citizen referendums.

On Monday a group of yellow vests announced in Paris their intention to present a list for the European Parliament vote in May.

‘The goal is to count our forces, see how many people want things to change in this country,’ Francis Lalanne, a 1980s pop singer who has since embraced ecological causes, said at a press conference.

France has a long history of protest movements sparked by tax grievances, though most eventually fade away before supporters can coalesce into a more organised structure.

With the winter holidays looming and public support easing in the wake of the government’s concessions, analysts say this could be the fate of the yellow vests as well.

Around 66,000 people turned out nationwide last Saturday, half the numbers of the previous week and well below nearly 300,000 when the protests began on 17 November.

Analysts note that the movement has failed to draw city and suburban dwellers into the streets.

It began ‘over questions related to cars’, which are far less used in the housing blocks and suburbs that surround Paris and other cities, said Julien Talpin, a sociologist in Roubaix, northern France.

In such areas where crime rates and poverty remain stubbornly high, ‘people are convinced that collective action doesn’t solve anything,’ he said, citing years of local advocacy and government action plans that have not yielded much.

More broadly, despite their determination, holding out with barricades and weekly protests may prove harder as the winter rolls on.

‘When you see all the ‘blah blah’ by these keyboard champions on Facebook, and then you see how many actually are on the streets, honestly the only thing I want to do is put away this vest,’ Stella, a 44-year-old office worker, said in Lyon last Saturday.