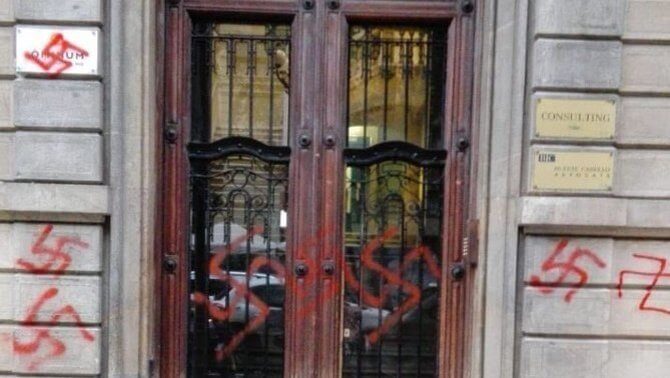 The headquarters of Òmnium Cultural, the Catalan pro-independence civil group, has had its façade in Barcelona defaced with various red swastikas.

The vice president of the group, Marcel Mauri, released a statement on Twitter saying that Òmnium will continue being deeply anti-fascist and committed to defending rights and freedoms, and ‘despite some people would like this, they’ll never succeed in silencing our voice,’ added Mauri.

Meanwhile, the Catalan government and representatives of various political parties condemned the Nazi symbol tags. The vice president of Catalonia, Pere Aragonès, showed his support to the group on Twitter: ‘We’re proud to be enemies to fascism. They shall not pass!’

Former Catalan president in exile Carles Puigdemont meanwhile connected the graffiti to the fact that independence supporters had ‘unmasked’ those behind the symbols and showed their ‘authoritarian face’ to the world.

One of the first to condemn the attack was head of the Socialist (PSC) party in Catalonia Miquel Iceta, who spoke out against ‘actions meant to intimidate’ the headquarters of the group, and stated that this deserves the repulsion of all those who consider themselves to be democratic.

Catalan Parliament speaker Roger Torrent also commented on the event, assuring that ‘before intolerance and trivialization, they will find an open society that loves freedom’.

The headquarters of pro-independence parties CUP and ERC in the town of Figueres were also painted with swastikas in December last year. The symbols were drawn alongside references to Article 155, implemented by the Spanish government following a declaration of independence to strip Catalonia of its self-rule, since then reversed.

Meanwhile, the headquarters of unionist Ciutadans (Cs) was tagged with anti-Nazi symbols a couple of months before.