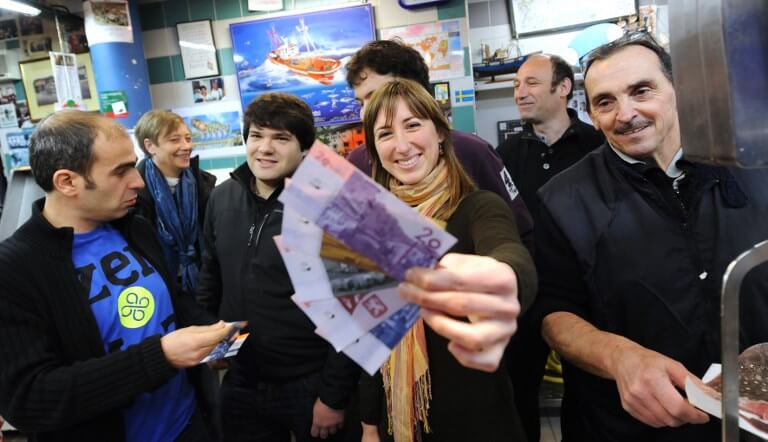 Nipping out to buy a cup of coffee or some bread? These days in France’s Basque region it may well be euskos, not euros, that you reach for in your wallet.

The border region’s local currency, which is equivalent to the euro, hit a milestone in October, hitting more than a million in circulation – a first in Europe.

This puts it ahead of the Bristol Pound, of which around 780,000 euros-worth are in circulation in the British city, and the 648,000 euros-worth of Chiemgauer used in Bavaria, Germany.

Like dozens of other micro-currencies around the world, the eusko was created with the aim of boosting the local economy by encouraging custom for neighbourhood businesses.

But in the Basque Country, a region with its own language and culture divided between France and Spain, having a separate currency has its own particular resonance.

Even for those who have never backed independence, the Basque identity is a source of deep pride.

‘If someone pays me in euskos, I’ll speak to them in Basque — it creates a link, obviously,’ said Pantxika Heguiaphal, a bakery worker in the French Basque city of Bayonne.

Its head Dante Edme-Sanjurjo believes the currency’s success comes from its ‘unifying capacity’.

But ‘this currency is not about Basque nationalism’, he said. ‘We’re mobilising different actors and bringing them together.’

Xina Dulong, manager of a Bayonne bar, uses the eusko for daily personal outgoings, but also to pay most of her suppliers. ‘There’s even one who I took on for the beer specifically because he used euskos,’ she said.

For a small annual fee, eusko users can open an account in the currency and obtain a debit card – or euskokart – which works in participating stores.

‘Every month more than 40,000 euskos are credited to personal accounts,’ said Edme-Sanjurjo.

Some 600,000 of the million euskos in circulation are in digital form, and the rest in cash.

Since its launch in 2013, around 3,000 people have signed up to use the currency, along with 770 businesses, 16 towns and the Basque regional authority.

There’s a built-in penalty for turning your back on the system, too: changing euskos back into euros comes with a five-percent commission fee.

Edme-Sanjurjo hails the eusko as ‘the most developed’ of around 40 similar local currencies in France.

‘But what we’re targeting now for 2021 is financial autonomy,’ he said.

Today, 50% of the overheads for running the currency are funded by subscription fees, but public subsidies make up the rest.

A month’s-long legal tussle between authorities in Bayonne and the French state has been a setback for those hoping to expand the currency.

Bayonne finally got the green light in June to make municipal payments such as councillors’ allowances and subsidies to community groups in euskos, despite objections from the state.

So far two Bayonne councillors have asked to be paid in euskos.

‘It’s a real currency, not a joke,’ said Martine Bisauta, deputy mayor in charge of sustainable development, who has requested part of her allowance in euskos.

‘It has to have the same flexibility as the euro, so we really need to bring it to life in society,’ she said.

Coronavirus in Spain full update (8 May)