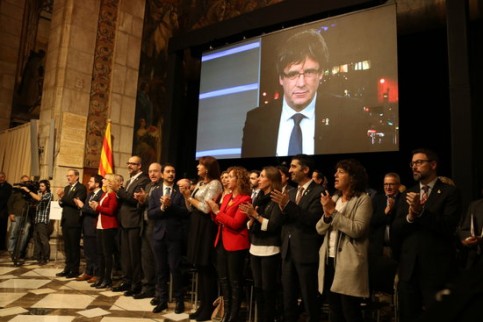 An organisation led by exiled leaders called Council for the Republic was one of the three pillars announced by the Catalan president, Quim Torra, right after being elected in May, in order to build an independent Catalonia – with the other two being the current institutions such as the government and Parliament, and the third being citizens.

And on Tuesday, the council was established, at an event held in the government headquarters, in Barcelona.

Carles Puigdemont and Toni Comín also spoke via video from Brussels. Indeed, they will be the leaders of this organisation, which was kicked off at an event attended also by parliament speaker Roger Torrent, Catalan government ministers, MPs from pro-independence parties and officials from grassroot groups.

The Council for the Republic was expected to be settled earlier, but with Puigdemont in Germany with an extradition case pending when Torra was sworn in, it was delayed until now. The Catalan government made clear on Tuesday afternoon that the group is private and will have no public funding, although it will ‘interact’ with the executive.

The Catalan cabinet spokeswoman, Elsa Artadi, said that the council should aim to ‘bring together the independence movement’.

Artadi also amended Torra’s three-pillar structure mentioned in May to add a new one: the ‘political prisoners’.

Despite her efforts to unlink it from the government, unionist parties criticised the Council.

The main unionist party, Ciutadans (Cs), believes that the initiative is an attempt to ‘replace’ the democratic institutions, while the Catalan Socialists (PSC) said that the Council of the Republic is a ‘disdain’ to Catalonia’s self-rule and has been founded just to make Puigdemont happy.

The Council joins another new organisation, the ‘forum on the constituent debate‘, which does have a link with the institutions, as it is an advisory body to the government.