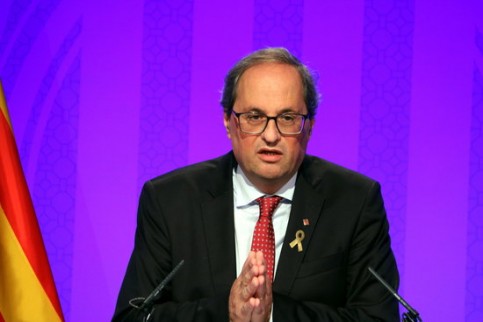 Catalan president Quim Torra has sent a letter to the Spanish Prime Minister, Pedro Sánchez, as well as world leaders, asking for international mediation to negotiate an independence referendum.

Recipients include the President of the United States, Donald Trump, the President of China, Xi Jinping, and the head of the Catholic church, Pope Francis, as well as several European prime ministers.

Torra urges Sánchez to start negotiations on an agreed vote on independence, and to suggest mediators or observers to facilitate the dialogue between both parts. ‘It is obviously in the interests of both sides, and of the world, for this process to succeed, since an orderly and peaceful resolution of the situation is the only means remaining to avert a European crisis,’ reads the letter.

Should pro-independence leaders be sentenced to prison, warns Torra, public demands for independence ‘will become overwhelming’.

Relationships between governments in Catalonia and Spain have improved since pro-independence parties helped oust president Mariano Rajoy and replace him for the Socialist Pedro Sánchez. Yet, finding common ground in the issue of self-determination remains complicated.

In the letter, Torra urges Sánchez to interfere in the judicial process by asking the public prosecutor—appointed by him—to drop criminal charges against Catalan leaders.

All imprisoned officials, as well as some of the political leaders abroad, are accused of violent rebellion. If found guilty, they could face prison sentences of up to 30 years.