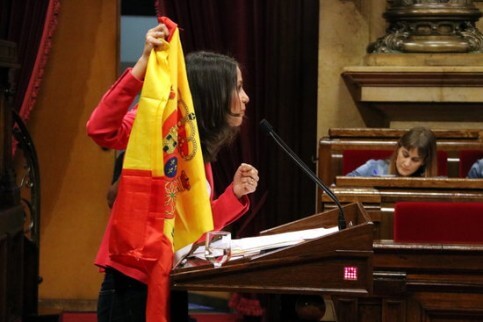 Leader of unionist party Ciutdans (Cs) in Catalonia, Inés Arrimadas, ended her speech in the Catalan parliament by brandishing a Spanish flag at the lectern. ‘Neither Torra nor the separatists will make this, and all it represents, disappear from Catalonia,’ she affirmed.

Arrimadas continued by addressing the Catalan president Quim Torra and telling him that ‘those who are not pro-independence are tired of his insults, his discourses, that he humiliate them with his rhetoric, that he attacks everyone’s symbols, that he attacks the majority feeling of all Catalans’.

‘When your colleagues from separatist commandoes burn Spanish flags at the parliament doors, when they take it down from Catalan government buildings, do you know why they do it?’ asked Arrimadas, holding up the Spanish flag she had kept in a folder. ‘Because this flag represents the equality, unity and solidarity of 47 million people. It represents a democratic country of the European Union,’ she said, referring to Spain.