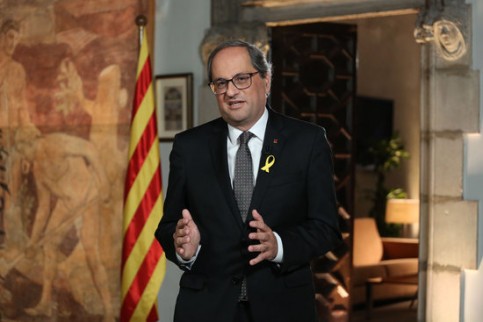 Catalan President Quim Torra said on Monday that Catalans ‘must decide’ if they are to ‘settle for injustice, threats, fear, violence, prison and exile’ or ‘resist and move forward’

In a televised speech on the eve of Catalonia’s National Day, Torra compared today’s situation to that of 300 years ago, during the ‘War of Succession‘ that saw Catalans fighting Borbon troops and losing their sovereignty to the then Spanish monarch.

‘Tomorrow is Catalonia’s National Day and, like 300 years ago, we are at a new historic crossroads for our country. We must decide if we settle for injustice, threats, fear, violence, prison and exile or if we resist and move forward,’ he stated.

Almost a year after holding an independence referendum that Spanish police tried to stop by force, Catalonia has nine pro-independence leaders in prison and seven others in exile. Its self-government was suspended for seven months following a declaration of independence that was not internationally recognised.

Back in 1713, said Torra, Catalans had to decide ‘between obeying or resisting King Felipe V’. ‘With 78 votes in favor and 45 against, they chose to resist,’ he said. One year later, in 1714, they were defeated. In fact, Catalonia’s National Day, on 11 September, commemorates that defeat.

Today, Spain’s king is Felipe VI, whose role in last year’s push for independence has been controversial. In fact, 80% of Catalans do not approve of the Spanish royal family, according to recent polls.

‘History tells us that every time we have fallen, we have stood up again and moved forward. And now, we are doing it again in a democratic and peaceful fight for civil, social and national rights,’ President Torra argued.

According to Torra, Catalans will ‘never abandon dialogue, peace and words’. Torra described ‘democracy and freedom’ as the values to be defended ‘by all Catalans’. ‘Freedom never divides. What divides is the lack of freedom,’ he stated.

President Torra confirmed his government’s ‘commitment’ to creating a Catalan Republic using ‘words and votes as the only tools’.

Torra has always said that he will implement the ‘mandate’ of Catalonia’s independence referendum and develop an independent country. However, he also stated that he could stop that if the new Spanish government, led by Socialist Pedro Sánchez, agrees to a binding and legal referendum.

Sánchez and Torra have initiated a dialogue, but the Spanish leader refuses to agree to a vote on self-determination, instead proposing a vote on a new self-government deal. The Spanish executive has also warned Torra that if he follows the path of his predecessor Carles Puigdemont and goes ahead with ‘unilateral’ independence, they will suspend Catalonia’s self-rule again.