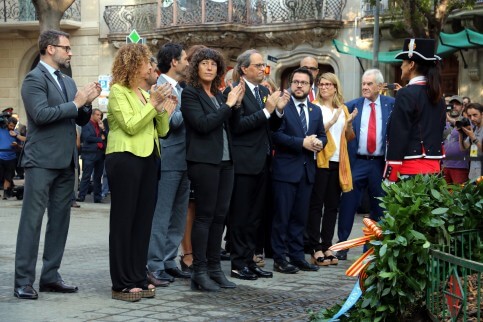 La Diada, Catalonia’s National Day began this morning with the traditional floral tributes at the Rafael Casanova monument in Barcelona.

Rafael Casanova was Barcelona’s last commander in chief during the War of the Spanish Succession.

Casanova was injured on 11 September 1714 in the exact spot where institutions, political parties and civil society organisations pay tribute to him every year.

After the war, Catalonia lost its sovereignty and Casanova became an icon in the demand for freedom and self-rule.

Most of Catalonia’s political parties laid floral tributes, although as usual some groups were absent. While the pro-independence Esquerra (ERC) party and the unionist Catalan Socialists (PSC) were present, the main opposition Ciutadans (Cs) party and fellow unionists, the People’s Party (PP), stayed away. Also absent was the pro-independence far-left CUP party.

On the other end of the political spectrum, representatives of the far-right Plataforma per Catalunya, which is opposed to independence, paid their respects while holding a Spanish flag, after which they left, shouting, ‘long live Hispanic Catalonia’.

ALSO READ: Quim Torra: ‘words and votes are the only tools’