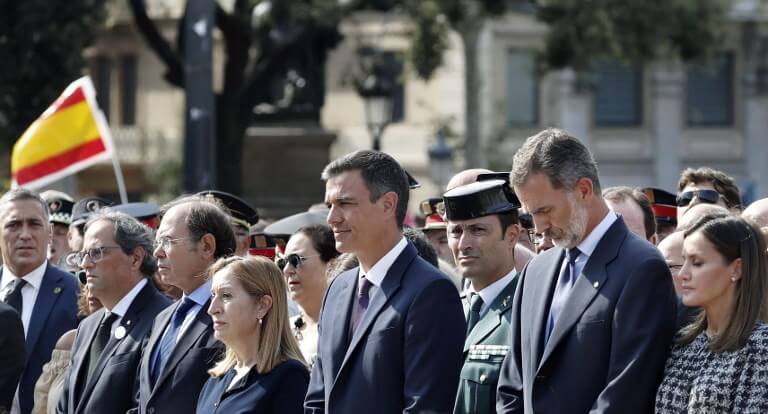 A year after a jihadist rampage in Catalonia killed 16 people, Spain paid homage to the victims on Friday without managing to set aside bitter divisions over the region’s independence.

Families of the victims had called for a ‘truce’ in the political row over Catalonia’s failed secessionist drive last October, which quickly overshadowed the bloody attacks that shook Spain on 17 and 18 August 2017.

But right above the spot on Barcelona’s famous La Rambla boulevard where a van came to a stop after ploughing into and killing 14 pedestrians on 17 August 2017, separatist activists unravelled a banner reading: ‘Free political prisoners. Without them this ceremony is a scam.’

Under the banner — which refers to Catalan leaders in jail over the failed secession attempt – relatives of the victims laid flowers on a pavement mosaic designed by Barcelona-born artist Joan Miro.

Further up the road on the central Plaza Catalunya, another large banner hung from a building, reading in English: ‘The Spanish king is not welcome in the Catalan countries‘, with an upside-down picture of the monarch, who took a hardline stance against the secession bid.

Felipe VI, his wife Letizia and Prime Minister Pedro Sánchez joined families of the victims on that very plaza for an emotional commemoration, to some cries of ‘long live the king’ and ‘long live Spain’ by pro-unity onlookers.

English poet John Donne’s 17th century poem ‘No Man is an Island’, which lauds the community spirit, was read out and songs including John Lennon’s ‘Imagine’ were played.

A year ago, tourists and locals in Barcelona were enjoying yet another sunny day in the city, perusing the many flower stands that line La Rambla. But around 4:30 pm, everything changed.

‘I was really lucky as I had left half-an-hour before but my mother was still there and she’s been really affected,’ said Fidel Poles, a 33-year-old florist. ‘The man from the flower shop opposite as well – he saw a woman dying in front of him and he’s having a really hard time.’

Abouyaaqoub fled, stabbing to death a young man before stealing his car. Hours later, a car carrying five of his accomplices sped into the seaside resort of Cambrils some 120 km (75 miles) south of Barcelona.

The five occupants of the Audi A3 jumped out and went on a stabbing spree, killing a woman, before they were shot dead by police.

‘Thought I was dying.’

‘I don’t remember anything about the attacker, I only saw him stabbing me. He left the knife stuck in my face, it plunged 15 centimetres (six inches) into my head … I honestly thought I was dying,’ said Ruben Guinazu, 55, one of the victims of the Cambrils attack.

The Islamic State group claimed responsibility for the attacks but investigators have not found any evidence that the cell of young men who carried them out had any international links.

Instead investigators believe an imam in the mountain town of Ripoll located about 100 kilometres north of Barcelona indoctrinated a group of youths of Moroccan origin.

The cell the imam formed was making bombs at an abandoned house some 200 kilometres from Barcelona which police believe they intended to use to strike the Sagrada Familia basilica in Barcelona, the city Camp Nou stadium or the Eiffel Tower in Paris.

But the explosives they were using accidently went off on 16 August, prompting the cell to improvise a vehicle attack similar to the ones carried out in other cities such as Nice and London.

Tensions between unionists and pro-independence activists

Despite the many calls to put aside political conflicts and disagreements on the first anniversary of the 17 August terror attacks last year, unionist and pro-independence supporters nevertheless clashed in the centre of Barcelona on Friday.

Members of the CDR pro-independence group protesting on Barcelona’s La Rambla, near to the site of the official commemoration, clashed with a march organized by the Spanish Monarchic Union in support of Felipe VI.

Tensions between the two groups arose when some demonstrators in favor of the king attempted to remove some of the banners and flags carried by the pro-independence supporters. This led to some pushing and shoving but without it escalating into violence.

Sánchez to meet Torra today, as protests gear up