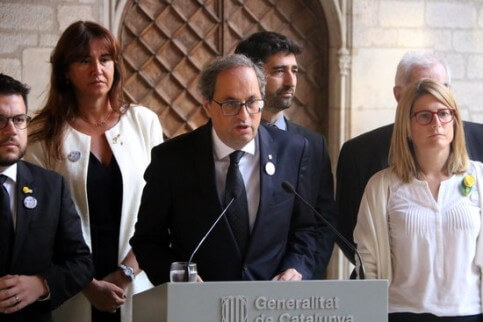 Catalan President Quim Torra praised the official event on Friday in Barcelona honoring the victims of the 17 August terror attacks last year, calling the discreet tone of the remembrance as ‘correct’. The event aimed to avoid politics and focus on the victims of the attacks despite the presence of some pro-Spanish protestors expressing support for King Felipe VI.

Torra introduces wife of jailed lead to king of Spain

Torra said the presence of Spanish flags did not bother him, citing respect for ‘freedom of expression’, and the president added that he took advantage of the king’s attendance to introduce him to Laura Masvidal, the wife of the jailed former Catalan interior minister, Joaquim Forn. However, Felipe ‘didn’t say anything’ on taking Masvidal’s hand, said Torra.

Earlier, the president made special mention of Forn in a speech on the first anniversary of the terror attacks in which he said ‘democracy always defeats terror’. Accompanied by the entire Catalan government, Torra referred to Catalonia as ‘peaceful and welcoming’ with ‘an integrated and brave society ready to combat barbarism and intolerance’.

Outside Lledoners prison, where seven political leaders are jailed, including the former home affairs minister Joaquim Forn, an event hosted by the main pro-independence civic associations was held on Friday evening. The Catalan president Quim Torra was set to take part after visiting Forn.

Barcelona is ‘a city of peace’, says Colau

Barcelona mayor Ada Colau also spoke before the commemoration of what she defined as a ‘cowardly act’, calling the Catalan capital ‘a city of peace’ and asking that Friday’s event focus on the victims as the ‘only protagonists’. Colau reiterated support to the families of the victims, naming each one, and adding that Barcelona ‘will never forget their names’.

As for Spanish Prime Minister Pedro Sánchez, before attending the event in Barcelona he tweeted his ‘solidarity with the pain of the victims’ and referred to Spain as ‘a country of peace’. In fact, Sánchez posted two tweets in the morning, one in Spanish and one in Catalan, under the motto: ‘Always with the victims.’

Parliament President Roger Torrent also put emphasis on the victims of the attacks, telling Catalan television after the event that ‘today is not a day for politics but rather a day to stand by the victims’. Confirming that he had had a chance to talk to relatives, Torrent praised the victims’ families, saying they ‘have shown huge strength and serenity’.

Barça off to winning start in La Liga