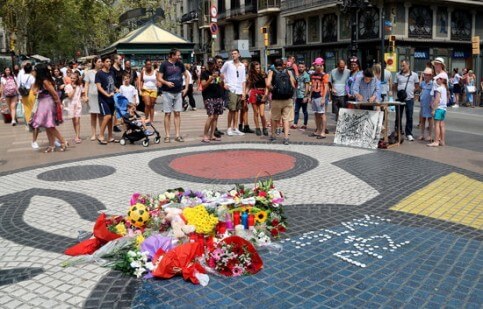 Terror struck Barcelona, Cambrils and the whole of Catalonia exactly one year ago, on 17 and 18 August 2017, while half of the country was on holiday.

Catalonia had never suffered a deadly jihadist incident before, but 12 months ago 16 people were killed, most on one of Barcelona’s crown jewels, La Rambla, the city’s most famous boulevard.

Now the authorities and the public are getting ready to remember those events, not only in the Catalan capital, but in several towns affected by the attacks in one way or another.

On Thursday morning some members of the public already began leaving flowers and candles in Pla de l’Os, a part of La Rambla decorated by a mosaic by Catalan artist Joan Miró. This is the spot that spontaneously filled with objects to remember the victims in the hours after the attacks.

Barcelona will host the central remembrance event on Friday at 10.30am in Plaça Catalunya. Including some music but no institutional speeches, the event will focus on the victims, under the motto ‘Barcelona, city of peace’. Around 900 media professionals from 150 media and 29 countries have been accredited to cover the tribute.

The event will be preceded by a floral tribute at 10am at Pla de l’Os on La Rambla. This is where the van driven by Younes Abouyaaqoub stopped after having run over dozens of people one year ago. The terrorist fled the crime scene, stabbed a man to death during his escape, and hid until he was found and shot dead by the police on August 21.

Also at 10.30am on Saturday, another tribute will take place in Cambrils, in southern Catalonia, where in the early hours of 18 August 2017 a second related terrorist attack left one victim dead.

Meanwhile, on Thursday at 5pm, an association representing Catalan terror victims was due to hold an event to pay tribute to the victims of La Rambla attack.

Also on Thursday evening, Ripoll, in northern Catalonia, will host some activities and speeches. This is the town where most of the alleged terrorist cell members lived, and where the supposed mastermind of the attacks, Abdelbaki Es Satty, worked as an imam. The Catalan president Quim Torra will attend the events.

On the eve of the attacks, a house in Alcanar, in southern Catalonia, blew up in what appeared to be an accident. Yet, hours after the Barcelona attack, the police linked both incidents. It was discovered that the house was being used to prepare the attacks and that the explosion meant an even deadlier strike had been avoided, with the terrorists forced to improvise a backup plan. On Thursday from 8pm, the event will also commemorate all the people involved.

The events were preceded by some relevant details of the investigation coming to light, including some pictures of the alleged terrorists, which has put the issue in the headlines for weeks in the run-up to the anniversary.

Yet, elements arising from those developments have shared the media spotlight with some political controversy.

The Catalan president, Quim Torra, said he would not invite the king of Spain, Felipe VI, to the commemorations, but in the end the monarch will take part as the events have been jointly organised by Barcelona’s local government and the executives of Catalonia and Spain.

As a result, some pro-independence groups refused to attend the tributes in Barcelona, including the far-left CUP party and the ANC civic organisation.

A demonstration ‘to support the King of Spain’ will be held on Friday morning on La Rambla, while the CDR pro-independence group has called two marches ‘in solidarity with the victims’.

However, the relatives of the victims, through a unit to support them, have demanded politicians ‘make a truce’ and  avoid using ‘other people’s pain’ politically.

On Wednesday, eight of the incarcerated pro-independence leaders published a letter condemning ‘the lack of cooperation’ by Spanish authorities in the police operation led by the Mossos d’Esquadra Catalan police after the attacks.

They also question the relationship between Spanish intelligence and the alleged mastermind.

‘The respect for victims, citizens and transparency obliges Spain to respond to these unresolved questions and explain the truth,’ they claim.

Pro-independence groups such as ANC have called an event for Friday evening outside the prison where most of the leaders are held in custody.