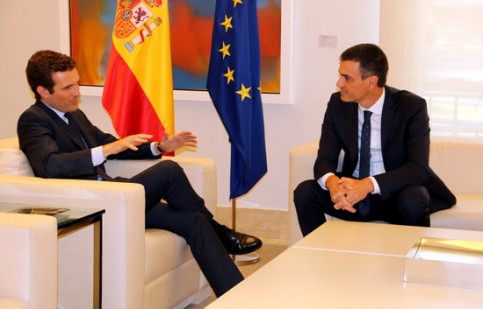 The new leader of the People’s Party (PP), Pablo Casado, has called on the Spanish Prime Minister to ‘guarantee the unity of Spain.’ The Catalan issue was a key topic of discussion in the first meeting between Pedro Sánchez and his counterpart in the opposition.

Casado demanded that Sánchez apply Article 155 of the Spanish Constitution if the Generalitat continues its ‘route of rupture.’ The legislation was used in October last year to strip Catalonia of its autonomy after a declaration of independence following a referendum deemed illegal by Spain’s previous PP administration led by Mariano Rajoy.

The Socialist (PSOE) Spanish government, which came into power after ousting Rajoy in a vote of no confidence, came under attack by the head of the former ruling party for approaching and initiating a dialogue with Catalonia. ‘We will never have a dialogue with those who want to break Spain,’ asserted Casado.

This came the day after the first bilateral meeting in seven years took place between both Catalan and Spanish representatives.

On Friday, Pedro Sánchez defended opening dialogue with Catalonia, and asserted that he ‘does not want to open new judicial cases.’ He asked for ‘coherence’ from PP, and asked for its support in seeking a solution to the ongoing Catalan crisis.

Speaking to press after the meeting, Casado stated that the PP will collaborate ‘loyally’ to guarantee that Catalonia ‘respects the (Spanish) Constitution.’ He also expressed willingness to reform the penal code in order to include the crime of calling a referendum.

Since hardliner Casado took the top post in Spain’s former ruling party, the party has toughened its rhetoric on immigration, as well as Catalonia.

Casado offered the full collaboration of PP’s absolute majority in the Spanish Senate, should the current government wish to apply Article 155 again, reiterating what he said last week in Barcelona. He suggested including the Catalan public TV channel TV3, as well as the ‘indoctrination in some schools’ in the hypothetical re-stripping of Catalonia’s autonomy.

The PP leader also said that they will demand Sánchez’s government to avoid ‘spectacles and outrages’ with regard to the Spanish king Felipe VI and his possible attendance at the coming anniversary commemoration of the Barcelona and Cambrils terror attacks. Catalan President Quim Torra has recently called on the public to shun the king’s presence should he attend.

Casado said that if the Socialists don’t guarantee that the Catalan government respects certain institutions, ‘the PP will act accordingly’.

New era for the People’s Party?

The ruling Socialists are hoping for a new era for the PP. Pedro Sanchéz’s right-hand woman, Cristina Narbona, told journalists that the Spanish head of government called on the PP to be a ‘loyal and responsible’ opposition.

Narbona reproached Casado’s statements made on topics such as Catalonia and immigration, calling him ‘completely wrong’. She explained that now is a new era in which they will be ‘very attentive’ to see if Casado’s party acts as ‘partisan opposition’ again on issues ‘as sensitive’ as immigration. She highlighted that the Socialist government has an immigration policy ‘that the previous government did not have’.

Regarding Catalonia, Narbona hopes that the new PP leader will be more informed ‘of how relations with Catalonia are developed’.

‘What PP failed to do is what the government is doing now, which is demanding that the law be complied with, and generating in the whole of Catalonia a hope on the horizon of belonging to Spain that convinces many more people,’ she said. ‘This has not happened in recent years, on the contrary,’ she added.