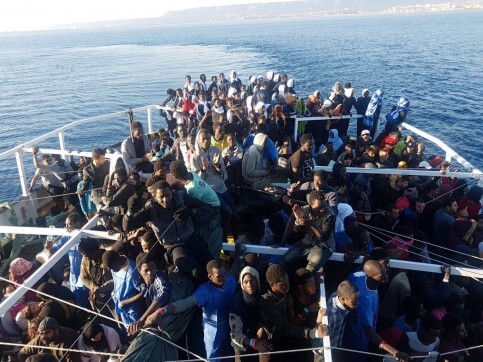 Italy has rejected offering a safe harbor to Proactiva Open Arms’ ships after the Catalan NGO rescued 87 people from drowning in the Mediterranean.

“Open Arms has rescued 90 immigrants from Libyan waters. Considering that 20 days ago they said that ‘Italian ports were not safe’ due to Salvini, I’m sure they’ll bring them anywhere but to Italy,” said interior minister Matteo Salvini. He added, mockingly: “Buon viaggio” (Have a safe trip!).

As the leader of Italy’s far-right League, Salvini has prompted the government to adopt a harsh stance on immigration. Last June, he declared victory after a standoff over the fate of 629 people rescued at sea ended with Spain accepting them.

Proactiva founder Oscar Camps responded to Salvini via Twitter and said that he “seemed obsessed” with the NGO. “Aren’t there more important problems in Italy which the interior minister should be taking care of? Obviously, he doesn’t know how to face them.”

It’s the second time in two weeks that Italy has blocked Proactiva’s ships from docking in the country. On July 20, the NGO arrived on the island of Mallorca with one woman and two dead corpses, including a dead child, after Salvini rejected them.