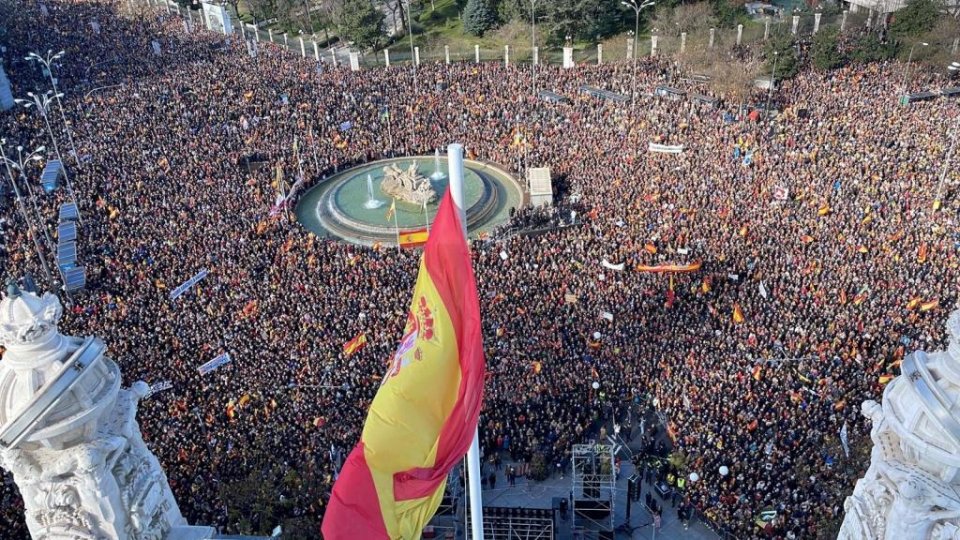 Thousands protested in Madrid on Saturday against Prime Minister Pedro Sánchez’s coalition government in a rally held in a key election year that was predominantly backed by the far-right Vox group, the country’s third-largest political party.

Participants waved Spanish flags and called on Sánchez to resign. Some held up signs with a photo of the Socialist premier calling him a ‘traitor’.

Around 30,000 people gathered in Madrid’s Cibeles Square for the rally, according to the central government’s delegation in the Spanish capital. Organisers said some 700,000 people had taken part.

The protest was called by dozens of right-leaning civil society groups and backed by the main opposition party, the right-wing People’s Party (PP), as well as Vox.

They are angered by the government’s decision to abolish the crime of sedition, of which nine Catalan pro-independence leaders were convicted over their role in the illegal referendum in 2017. It was replaced with an offence carrying a lower prison sentence. ALSO READ: Spain drops sedition charge against former Catalan president Puigdemont.

They are also angered by a flagship law against sexual violence that toughened penalties for rape but eased sentences for other sexual crimes. This has set some convicts free after their jail terms were reduced. ALSO READ: Spanish minister accuses judges of ‘machismo’ after loophole in Spain’s new rape law used to reduce sentences.

Speaking to reporters at the start of the rally, Vox leader Santiago Abascal denounced ‘the worst government in history’ which ‘has divided Spaniards and freed rapists and coup leaders’.

‘We need a permanent and massive mobilisation until the autocrat Pedro Sánchez is expelled from power,’ he said.

PP leader Alberto Núnez Feijóo, who has tried to push the party to the centre since becoming its leader in April, was not at the rally but encouraged members to attend.

Most polls suggest the PP would win a general election expected at the end of the year but would need the support of Vox to govern. Before that, Spain will vote in May in regional and municipal elections.

One of the main dilemmas facing Feijóo is whether to continue pursuing political alliances with Vox as it has in some regions or to freeze them out to try to widen the PP’s base.

Vox splintered off from the PP in 2013 and is now the third-largest force in parliament.

Lacking a parliamentary majority, Sánchez’s coalition government formed between the PSOE socialists and left-wing Podemos group, has been forced since its formation to negotiate with Basque and Catalan separatists to pass bills, which has angered many on the right.

They accuse Sánchez of having eliminated the crime of sedition to assure the continued support of Catalan pro-independence party, Esquerra Republicana (ERC) in tight parliamentary votes.

The government argues that sedition is an antiquated offence that needed to be replaced with one better aligned to European norms.

Sánchez continues to defend his record, telling a PSOE party rally in Valladolid on Saturday that his government had to take steps to defuse the conflict in Catalonia.

The independence bid which happened under the watch of the previous PP government had left Spain standing ‘before the abyss’, he added.

Sánchez also recalled that his government has ramped up social spending to help Spaniards deal with high inflation, for example by increasing pensions and civil servant salaries.