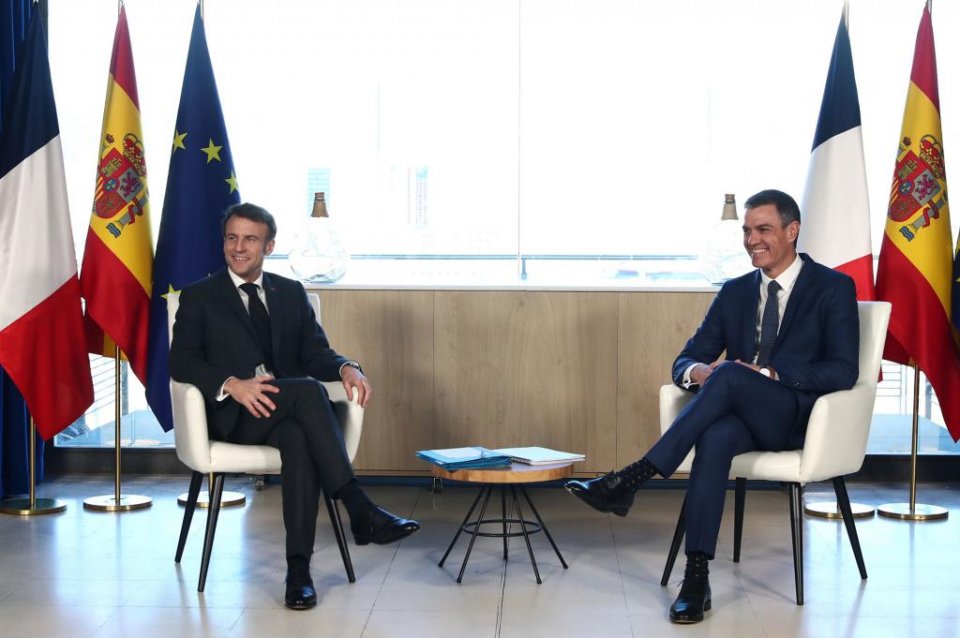 Spanish Prime Minister Pedro Sánchez met with French President Emmanuel Macron in Barcelona on Thursday, in a Spain-France summit designed to strengthen relations between the European neighbours by signing a friendship treaty.

The one-day summit held at the National Art Museum of Catalonia (MNAC) came amid a day of widespread strikes in France against Macron’s bid to increase the minimum retirement age from 62 to 64. Meanwhile Sánchez, as host, had to endure a noisy demonstration by Catalan pro-independence supporters near the summit’s venue.

The Treaty of Barcelona signed by the two leaders establishes working groups between their governments in a variety of areas. The leaders and several of their ministers discussed issues including energy, migration and support for Ukraine’s war effort — all in line with finding common cause in steering European Union policy.

‘We are not just reinforcing our countries, we are reinforcing Europe,’ Sánchez said, calling the treaty ‘historic’.

‘We are going to massively reinforce the bilateral relationship … and make it even more efficient’ at the European level, Macron said. ‘That treaty is also going to strengthen these common views’, especially regarding European sovereignty and strategic autonomy.

Both governments consider this new diplomatic bond of the highest order. Spain only has a similar treaty with Portugal, while France has them with Germany and Italy.

Spain, France and Portugal agreed late last year on a major undersea pipeline to transport hydrogen from the Iberian Peninsula to France and eventually the rest of Europe. The energy pipeline, dubbed H2Med, and also referred to as ‘BarMar’, will run from Barcelona to Marseille.

Macron and Sánchez also both want the European energy market to be reformed to respond to the energy crisis provoked by Russia’s invasion of Ukraine. Spain also hopes France could back its request that the EU extend the permission granted last year for Spain and Portugal to apply special measures to lower energy prices, a plan that could possibly serve as an inspiration for all of Europe.

Several thousand Catalan pro-independence supporters rallied along a wide promenade at the foot of the hill near the MNAC summit venue on Thursday, with the sound of their jeers heard as Macron and Sánchez reviewed Spanish soldiers before the national anthems were played. Organisers said that 30,000 people were at the rally, while local police put the figure at 6,500.

Catalan president Pere Aragonès had greeted Macron and Sánchez outside the museum but then broke protocol by leaving before the group photo and anthems.

Aragonès later spoke to the media, reiterating his stance that the independence push is not over, despite claiming that ‘some have tried to use today’s summit as a way of giving the impression that the political conflict between Spain and Catalonia is resolved, that it no longer exists’.

‘But nothing is further from the truth,’ he added.

Sánchez said he was grateful that Aragonès turned up and underscored the choice of Barcelona as his choice for the signing of the treaty.

The rally saw many protesters chanting in support of the former Catalan president, Carles Puigdemont, who is now in exile after leaving Spain in October 2017, just after the independence referendum. Click here for all our reports related to: Catalan independence.