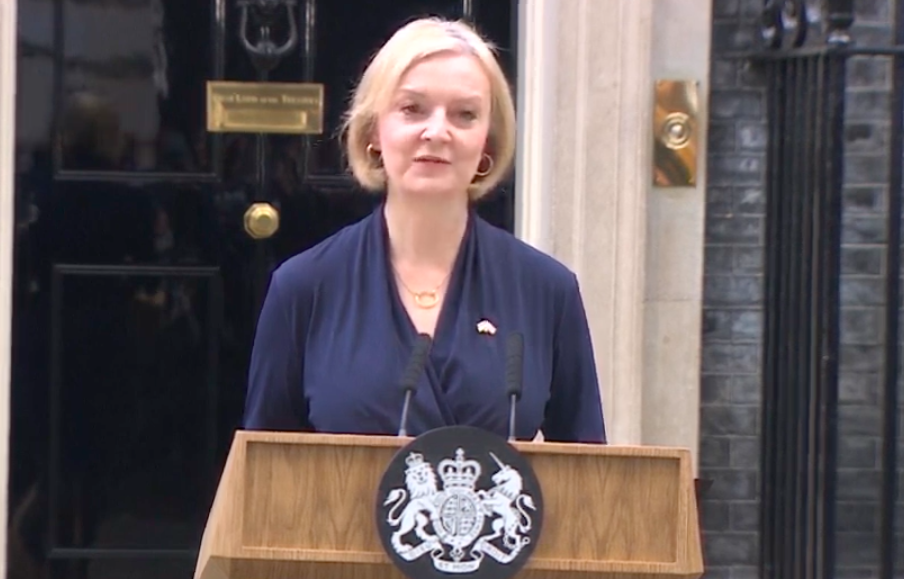 Liz Truss has resigned as British Prime Minister, after just six weeks in office. She made the announcement just after 1.30pm local time, at a lectern outside Downing Street in London.

Her announcement comes as more and more MPs called for her to step down, and after a meeting with senior Tory party figures.

Truss began her statement by saying that she came into office ‘at a time of great economic and international instability’ and that the UK has been ‘held back for too long by low economic growth’. She said she was elected by her party ‘with a mandate to change this’.

She claimed that the government had ‘delivered on energy bills’ and cut national insurance, as well as ‘setting out a vision for a low tax high growth economy that would take advantage of the freedoms of Brexit’.

She then said, ‘I recognise, though, given the situation I cannot deliver the mandate on which I was elected by the Conservative party.’

Truss said that she had spoken with King Charles to notify him that she is resigning as the leader of the Conservative party.

She said that earlier she had met with the chair of the 1922 Committee, Sir Graham Brady, where they ‘agreed that there will be a leadership election to be completed within the next week’. She said: ‘This will ensure that we remain on a path to deliver our fiscal plans and maintain our country’s economic stability and national security.’

She also said she would remain as prime minister until a successor is chosen.

Starmer said that ‘the Conservative Party has shown it no longer has a mandate to govern’.

Calling it a ‘revolving door of chaos’, he said that ‘the damage they have done will take years to fix’.

He said: ‘The Tories cannot respond to their latest shambles by yet again simply clicking their fingers and shuffling the people at the top without the consent of the British people. They do not have a mandate to put the country through yet another experiment; Britain is not their personal fiefdom to run how they wish.’

‘The British public deserve a proper say on the country’s future,’ he continued. ‘They must have the chance to compare the Tories’ chaos with Labour’s plans to sort out their mess, grow the economy for working people and rebuild the country for a fairer, greener future. We must have a chance at a fresh start. We need a general election – now.’