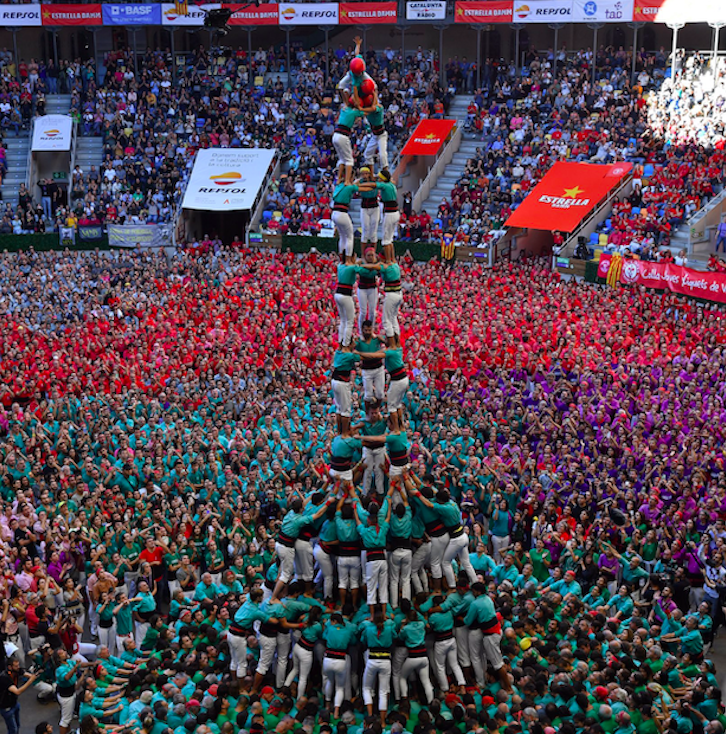 The world’s largest ‘castells’ competition (‘human towers’) took place in Tarragona (Catalonia) on Sunday, with some 11,000 spectators packing the bull ring to watch the daring Catalan tradition. The Castellers de Vilafranca team won the event for a 12th time.

The human towers were added to UNESCO’s list of Intangible Cultural Heritage of Humanity in 2010 as an ‘integral part of (Catalan) cultural identity’.

The tradition dates back to the 18th century, when people first started building human towers in the Catalan town of Valls.

In an event held in Tarragona every two years, teams of ‘castellers’ compete to construct the highest and most complicated tower by standing on each other’s shoulders. Due to Covid-19, the 2020 edition was postposed to this past weekend.

The team from Vilafranca del Penedès beat 40 other groups to take the top spot and scoop the €16,000 prize at the competition.

The ‘Verds’, as they are known, managed to construct a ten-tier tower with three people in each, known as a ‘tres de deu’. The construction included two tiers of extra support to the base (‘folre i manilles’).

Their tower reached around 13 metres in height – and a combination of height and skill, including a safe dismount, gave them the most points.

The youngest and most nimble team members, wearing a protective helmet, scrambled up the backs and shoulders of their teammates to the top.

The nail-biting competition saw some towers precariously wobble before crumbling, its members falling onto those below. Organisers said 71 people had received medical attention, while 13 were taken to hospital.

The first castells competition in Tarragona bull ring took place in 1932 and the competition has been held every other year since 1970.