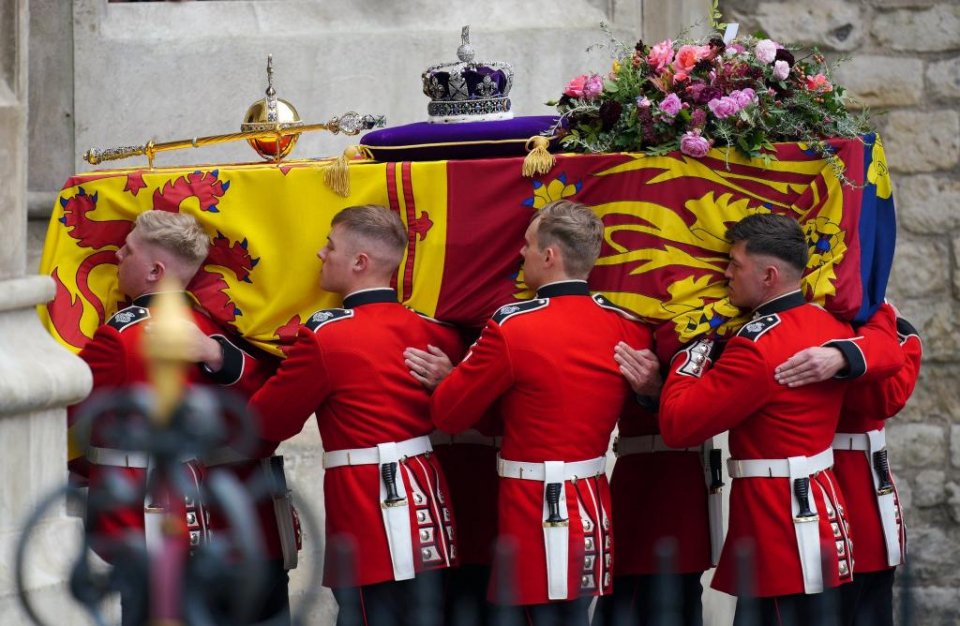 Britain and the world said a final goodbye to Queen Elizabeth II at a state funeral held in London on Monday, that drew presidents and kings, princes and prime ministers — and crowds who massed along the streets of London to honour a monarch whose 70-year reign defined an age.

A day packed with events in London and Windsor began early when the doors of 900-year-old Westminster Hall were closed to mourners after hundreds of thousands had filed in front of her flag-draped coffin. Many had waited for hours in line, including through cold nights, to attend the lying in state in an outpouring of collective grief and respect.

The first state funeral since Winston Churchill’s was filled with spectacle: 142 Royal Navy sailors drew the gun carriage carrying Elizabeth’s coffin to Westminster Abbey, with King Charles III and his sons, Princes William and Harry, walking behind as bagpipers played ‘Mist Covered Mountains’. Pall bearers carried the coffin into the abbey, where around 2,000 people ranging from world leaders to health care workers gathered to mourn her. Ahead of the service, a bell tolled 96 times — once a minute for each year of her life.

‘Here, where Queen Elizabeth was married and crowned, we gather from across the nation, from the Commonwealth, and from the nations of the world, to mourn our loss, to remember her long life of selfless service, and in sure confidence to commit her to the mercy of God our maker and redeemer,’ the dean of the medieval abbey, David Hoyle, told the mourners, as the funeral opened.

Much of the music at the state funeral was selected for its special significance to Queen Elizabeth II, and many of the choices also had a long association with Westminster Abbey. You can click here for the full order of service.

It drew to a close with two minutes of silence observed across the United Kingdom. The attendees then sang the national anthem.

Monday was declared a public holiday in honour of Queen Elizabeth, who died on 8 September — and hundreds of thousands of people descended on central London to partake in the historic moment. Long before the service began, city authorities said viewing areas along the route of the funeral’s procession were full.

Following the funeral, the coffin — accompanied by units of the armed forces and members of her family — was brought through the capital’s streets.

At Wellington Arch near Hyde Park, it was placed in a hearse to be driven to Windsor Castle — where Elizabeth spent much of her time — for another procession before a committal service in St. George’s Chapel, and for Elizabeth to be laid to rest with her late husband, Prince Philip, at a private family service.

At The King's request, the wreath contains foliage of Rosemary, English Oak and Myrtle (cut from a plant grown from Myrtle in The Queen's wedding bouquet) and flowers, in shades of gold, pink and deep burgundy, with touches of white, cut from the gardens of Royal Residences. pic.twitter.com/5RteIWahuW