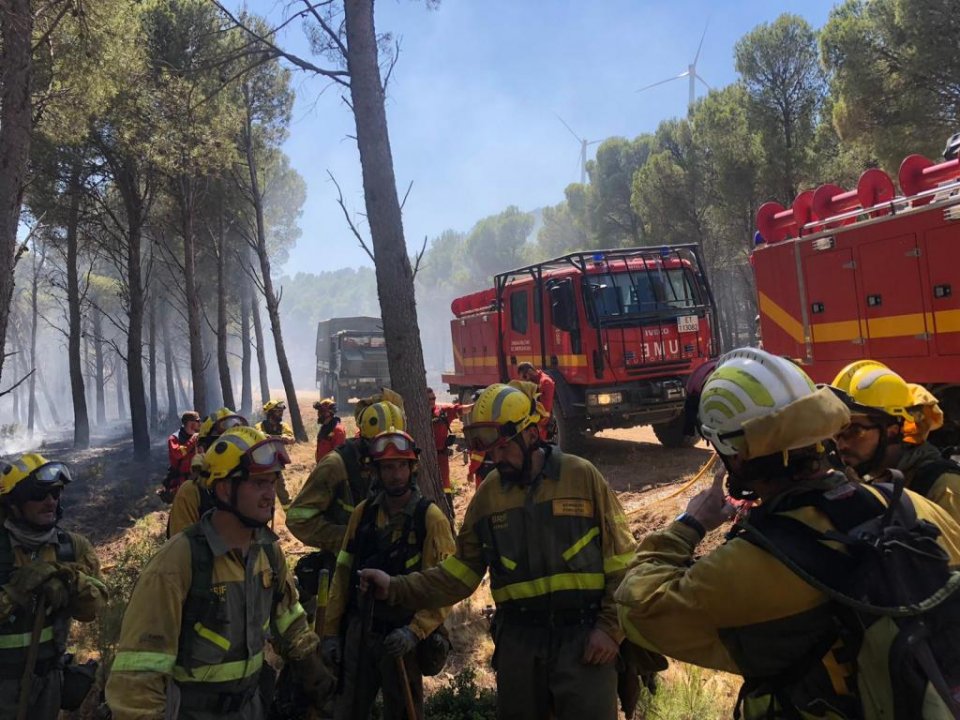 Firefighters in Spain were battling strong winds during Monday as a huge forest fire burnt out of control in the south east while another blaze in the north was stabilised, officials said.

Both fires had broken out late on Saturday, with more than 350 firefighters engaged against the wildfire in the northern Aragón region that has so far devastated an area of 6,000 hectares and forced the evacuation of eight villages and at least 1,500 people from their homes.

In the Aragón blaze, officials had feared the flames could reach the Moncayo nature reserve some 80 kilometres west of Zaragoza, but that has now been successfully headed off.

Javier Lambán, president of the Aragón government, had said on Sunday that the situation was critical in the town of Añon de Moncayo – but he tweeted just after 1.30pm on Monday that the fire was now ‘stabilised’ and that ‘this afternoon, [there will be a] probable and gradual return to their villages of the evacuated neighbours’.

While firefighters have managed to steady the Aragón blaze, however, the wildfire in the Valencia region continues to spread.

Hundreds of firefighters backed by 25 planes and helicopters were tackling the flames in the Vall d’Ebo, 50 kilometres north of the coastal resort of Benidorm.

So far, more than 6,500 hectares of land have been destroyed and more than 1,200 evacuated from their homes, with firefighting efforts complicated by strong winds in terrain that is difficult to access, the regional administration said.

‘It is a very complex fire and very complicated terrain. We evacuated more than 1,000 people yesterday and last night, we had to evacuate 70 or 80 more homes,’ regional emergency chief José Maria Angel told Cadena SER radio, saying the fire’s perimeter was ‘progressively increasing’.

With the winds expected to drop during the day after a blustery weekend, civil protection officials said they were hopeful the stabilisation of the fire could see the evacuees to return home.

So far this year, Spain has suffered 390 wildfires, fuelled by scorching temperatures and drought conditions, which have destroyed a total of 265,467 hectares of land, according to latest figures from the European Forest Fire Information System. That’s over four times the country’s full-year average of 66,965 hectares since 2006, when records began.

Fires have blazed across Europe including in France, Greece and Portugal, making 2022 a record year for wildfires on the continent.