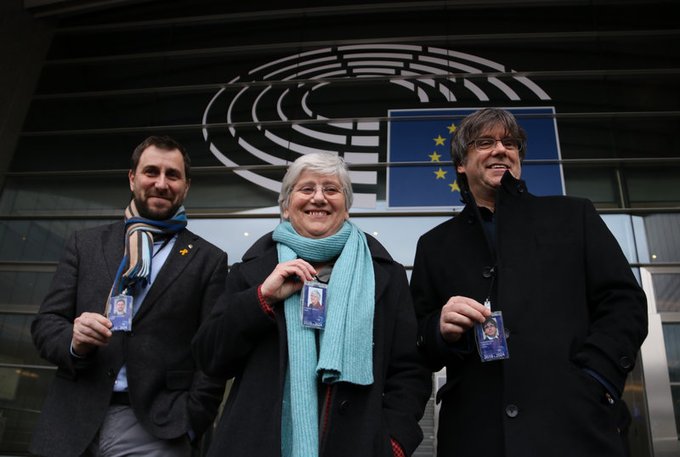 The Court of Justice of the European Union (CJEU) has decided to provisionally restore the parliamentary immunity of three Catalan pro-independence MEPs who fled Spain fearing arrest over an independence push they led in the region.

The decision by the general court is the latest episode in the legal saga on the fate of the former president of Catalonia, Carles Puigdemont, and two of his associates, former Catalan health minister Toni Comín and former Catalan education minister Clara Ponsatí.

The Junts per Catalunya (JxCat) politicians, who became MEPs in 2019 but are still wanted in Spain for organising the 2017 independence vote, lost their parliamentary immunity in March 2021. Puigdemont and a number of his pro-independence colleagues had fled to Belgium in October 2017, fearing arrest after holding the referendum that the Spanish courts and government said was illegal.

The Italian court first wanted to see how the European Union’s general court would rule on Puigdemont’s appeal to the lifting of his immunity as a MEP that the Luxembourg-based EU court confirmed in July.

Puigdemont, 59, has successfully avoided extradition since taking up residence in Waterloo, Belgium, and has not been stopped from working. In its order, the court however noted that ‘the fact that the Belgian authorities have not surrendered the appellants to the Spanish authorities cannot be used to rule out the high probability of their arrest’.

The judicial battle is expected to continue for months, if not years, since avenues for appeal remain open.

Wild boars are destroying parks in the Madriguera area of Sitges