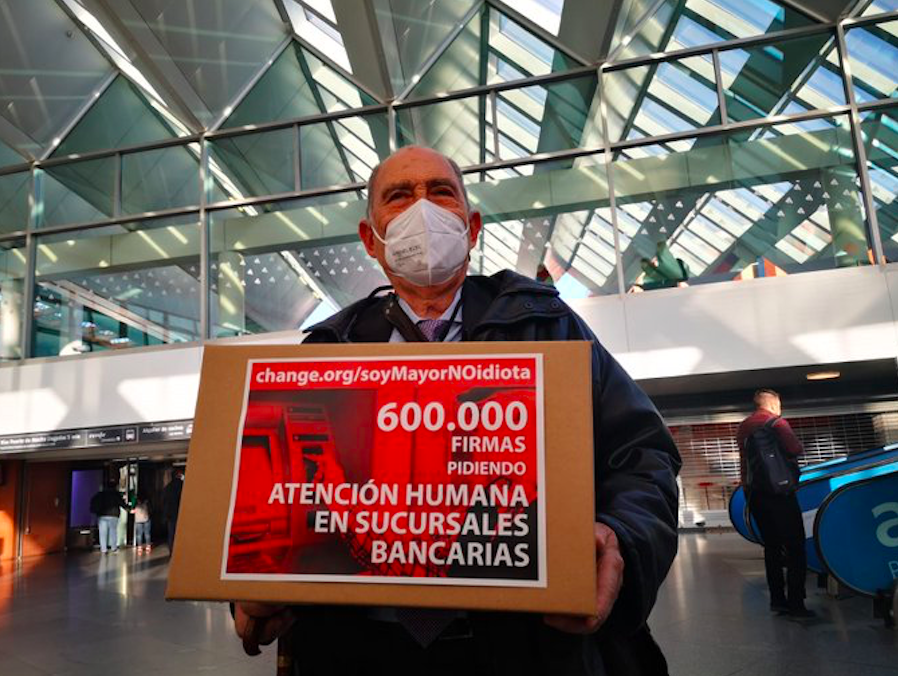 A retired Spanish doctor who has been campaigning to maintain face-to-face customer services at banks, presented a petition in Madrid on Tuesday with more than 600,000 signatures to the secretary of state for the treasury, Carlos Cuerpo, at the Economy Ministry. He also presented his petition to the Bank of Spain.

Carlos San Juan, aged 78 and from the Valencia Region, used the slogan of ‘SoyMayorNOidiota’ (‘I’m old, not an idiot’) for his campaign against the Spanish banks’ growing use of digital services.

San Juan has been calling for the banks to provide staffed services to older people in particular, rather than making them use online services, with many elderly people not fully adept or at ease with online banking.

As the campaign gathered momentum last month, San Juan received a phone call from the governor of the Bank of Spain, and the government also publicly appealed to banks to ensure they were meeting the needs of older people.

Spain’s banks, like many others worldwide, are shuttering branches and scaling back the times when face-to-face services are available, prompting San Juan to call for ‘urgent measures’.

Spain’s government minister for economic affairs and digital transformation, Nadia Calviño, stood side by side with San Juan on Tuesday and has promised ‘effective measures’ by the end of the month to address the problem.

Referring to Spain’s estimated 10 million retirees, San Juan said outside the Economy Ministry that he was motivated by the ‘desperation of many, many people who feel excluded’.

On his petition website he complained that ‘nowadays almost everything is done on the internet … and we don’t understand those machines’.

‘We don’t deserve this exclusion,’ he said, demanding ‘human attention’ when he goes to a bank. He said at times he felt ‘humiliated’ when asking for help from a bank employee ‘and they treated me as if I was an idiot because I couldn’t do it’.

The banking sector in Spain cut around 19,000 jobs during 2021. It has also been estimated that 11% of bank branches in Spain have been closed since the start of the Covid pandemic.

But the growing use of digital services is not only affecting banks, Spanish media have reported. Around a third of Spaniards feel restricted in terms of their ability to access services, jobs or state aid due to the digital divide, surveys show.

The government has promised to lobby the banks to make staff available for older people, saying the industry recognised the problem and had vowed to remedy it.

ALSO READ: Santander announce profits of €8.1bn for 2021, with digitalisation a key focus.