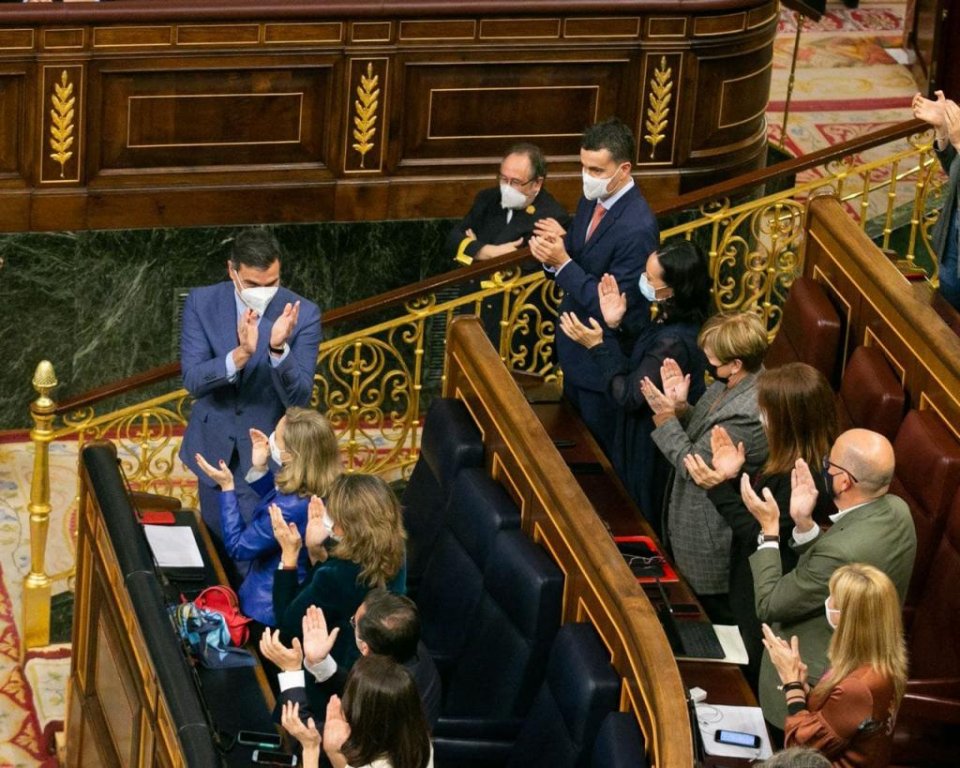 Spain’s ruling coalition government of the socialist PSOE and left-wing Podemos parties, and led by Prime Minister Pedro Sánchez, secured its hold on power on Tuesday with the approval of a landmark labour reform backed by unions and employers, as well as finally getting the country’s 2022 budget passed.

The budget, Spain’s biggest in history and which includes a sizeable disbursement of the EU’s pandemic recovery funds, had originally passed its first reading in late November, but it needed another vote on Tuesday in order to approve a partial amendment that had come from the Senate. Now passed, the spending plan will come into effect from 1 January 2022. ALSO READ: Spain passes biggest budget in its history, with help from ERC party.

The final €450 billion budget for 2022 allocates more than half of its funds to education, health, pensions, subsidies and other forms of social spending. ALSO READ: Sánchez: ‘Economic Recovery Plan most ambitious in Spain’s recent history’.

The budget includes the first €20 billion of €70 billion total granted to the country from the European Union’s Covid-19 recovery funds. The European Commission transferred to Spain an initial tranche of €10 billion earlier this week.

The budget approval is also being seen as a crucial test of the parliamentary support of the minority coalition of the PSOE socialists and the anti-austerity Podemos party. In a 281-62 vote with one abstention, Sánchez has dispelled pressure to call an early election and increased his chances to see out his term, which ends in 2023.

His cabinet also passed on Tuesday a decree that overhauls the country’s labour laws, a commitment by Sánchez´s government with the European Commission before the end of 2021 in order to secure the next instalment of EU pandemic funds.

The labour reform reverts business-friendly regulations adopted in 2012 by a previous administration led by the right-wing People’s Party (PP), at the height of last decade’s sovereign debt crisis.

The key points of the new reform are that it limits most temporary contracts to a maximum of three months and brings back collective bargaining with unions as the main channel to negotiate contracts. It also adopts the furlough programme used to avoid layoffs during the Covid-19 pandemic as a fixed tool for companies to turn to in future crises.

The reform has been sanctioned by workers’ unions and trade associations, a rare achievement for the government and a personal win for Labour Minister Yolanda Díaz, a former labour attorney who has become the rising star in Podemos, the coalition’s junior partner – especially following the departure of Pablo Iglesias from politics.

‘This reform turns a page on the precariousness in Spain,’ Díaz told reporters during a weekly news conference following the cabinet meeting, referring to official data that shows that one out of four contracts in Spain is short-term, the highest rate in the EU.

The country’s unemployment rate, at 14.5% in October, is also one of Europe’s highest.

‘I dare to say that there are young people and women who have not known a decent contract in their lifetime,’ Díaz added. ‘Now we are going to give them the opportunity to break with the trap of precarious lives.’

The new rules take effect on Wednesday, although the government will need to find support once again from smaller parties to ratify the changes in a parliamentary vote early next year.

The minority coalition government of Pedro Sánchez controls 155 of the 350 seats in the Spanish Congress and has needed the votes of Catalan and Basque nationalist parties, among others, to pass legislation.