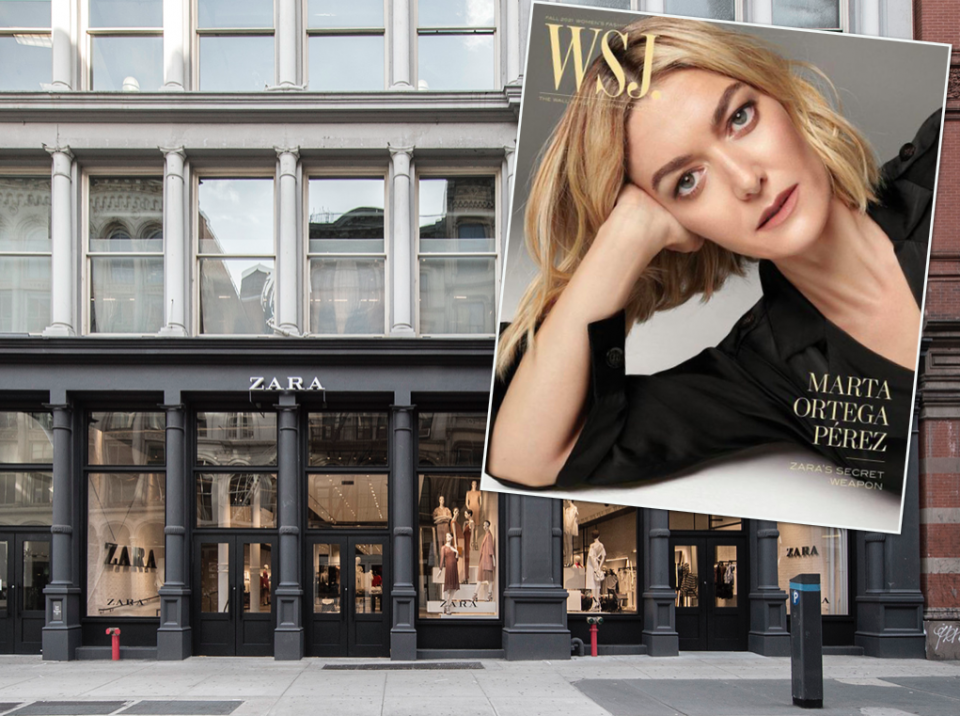 Next April, the business and fashion worlds will be watching with close interest as Marta Ortega Pérez takes over from Pablo Isla as chair of Inditex, Spain’s biggest and most well-known listed company.

Ortega is also the daughter of the founder of Inditex, Amancio Ortega, who stepped down as chair in 2011, after amassing a fortune from the clothing empire that makes him the richest man in Spain.

Founded by Ortega in 1975 in La Coruña, in the northwestern region of Galicia, today the Inditex group comprises of globally recognised fashion brands including Zara, Bershka, Stradavarius, Pull and Bear, Oysho and Massimo Dutti. Its annual sales are over 20 billion euros.

The announcement of Ortega’s appointment was made by Isla this week, as he addressed shareholders at the annual general meeting of Inditex and explained more about the new leadership structure that is to be in place from next spring.

Critics are already commenting on the huge task ahead for the 37-year-old Ortega, who has worked for the company for the last 15 years.

But the determined Ortega will be taking on the role with a passion and enthusiasm that may silence these critics, who are questioning whether it is too soon for the ambitious daughter of its founder to take on the role.

Moving into the role will put her firmly in the spotlight of the fashion industry. There is already speculation in the sector that she will struggle at the top, but her background and passion for the company should stand her in good stead to achieve continued success for the group and silence the concerned commentators.

If share price is any pointer to how analysts think she will fair, however, it was disappointing news for Ortega. Shares in the company dropped by 5.8% on the day of the announcement this week.

Analysts were wary of the appointment, with many saying that the move was ‘too soon’ and that there was ‘a lot to prove’ with the new role.

Isla, however, was buoyant during the video news conference to shareholders, saying that it was the right time to make the change as the company had a solid position, with sales in the second quarter of the year tipping over the levels achieved in pre-pandemic 2019.

Isla said: ‘These changes that we are announcing today are very well thought out changes, which are part of a process within the company and we understand that now is the right time to address this new stage.’

He went on to say that ‘we are confident that the company will continue to develop successfully’.

The re-organisation at the top also sees the appointment of Oscar Garcia Maceiras as CEO, with immediate effect. Maceiras was previously general counsel and board secretary at the company, having been appointed in March. His promotion to CEO sees the outgoing CEO, Carlos Crespo, moving to take on the position of COO.

An analyst at Spanish investment firm, Alantra, said that ‘we think that the changes are bad news for Inditex. We would have expected a more orderly and smoother transition period, with Isla supervising in a non-executive role.’

Kepler, a brokerage firm, also voiced concern about the news, saying that ‘both Marta Ortega Pérez and the CEO Oscar Maceiras have a lot to prove when it comes to their ability to run this big monster in the middle of the Covid crisis’.

Other analysts were less opposed to the news, saying that the company had performed well during the pandemic and was well positioned to manage on-going global supply chain issues.

Adam Cochrane, a Deutsche Bank analyst, said that ‘given the orderly handover process and long-term strategy of the group, these changes are unlikely to provide any scope for a material change in strategic direction’.

Another analyst, Andrew Busby of Retail Reflections, also had confidence in the move, saying ‘she is a safe pair of hands and I think the brand will continue evolving, growing and being successful’.

Speaking about her appointment, following its ratification at the annual shareholders’ meeting, Ortega spoke with enthusiasm and passion about her future role.

She said: ‘I have lived and breathed this company since my childhood, and I have learned from all the great professionals I have worked with over the last 15 years. I’m deeply honoured by the trust that has been placed in me, and enormously excited about the future that we are all about to embark upon together.’

With a clear commitment to the role and the group, she explained that ‘I have always said that I would dedicate my life to building upon my parents’ legacy, looking to the future but learning from the past and serving the company, our shareholders and our customers where I’m most needed’.

What is known about the next chair of Spain’s biggest listed company?

What impact is Ortega likely to have when she takes up her new position next April? Ortega is the only child of Amancio Ortega and his second wife, Flora Pérez. She has two step-sisters from her father’s first marriage, both of whom are not involved with the group.

She was educated at a Swiss boarding school, during which time she spent most weekends competing in equestrian Grand Prix show-jumping events. She continues riding regularly at an amateur level and speaks five languages.

After boarding school, she went on to study business management in London, then started her working life as a shop assistant at a Bershka shop in London; a spell that taught her much about both the challenges and rewards of working in the fashion and retail sectors.

Speaking recently to the Wall Street Journal about her early career, she said that ‘the first week, I thought I was not going to survive, but then you get kind of addicted to the store. Some people never want to leave. It’s the heart of the company’.

Explaining her passion for the industry, she said that she first fell in love with fashion when a teenager, when she went behind the scenes at a Zara shoot with model Kate Moss in Barcelona.

Over the last 15 years, she has held different positions in many parts of the business, getting to know how the group operates. Most recently, she has headed up Zara’s brand image and led on campaigns including ‘Charlotte Gainsbourg by Zara’.

She also met her husband during this time; a colleague at Inditex, Carlos Torretta, who is also the son of fashion designer, Roberto Torretta.

Representatives at the company said that she has been a leader over the years in strengthening Zara’s brand image and will continue to oversee areas, including creative collaborations and the launch of new collections for the group globally.

A company source revealed to The Daily Telegraph that one of her strengths is her vision to bring fashion to all, saying ‘her big thing is the product; she brings the consumer perspective’.

Her varied roles, experience and talent, combined with an obvious passion for the company and industry, will certainly put her in a strong position to take the company forward into a new era.

Driven by the successes achieved by her father, who came from humble beginnings to accumulating billions as the business evolved, she will be determined to continue to develop the group and answer the critics who think it is too much too soon for her to be taking charge.

The next few months will, no doubt, see Ortega taking this all in her stride. Her passion and vision to combine fashion, technology and accessibility is as strong, if not stronger, than her father.

In a recent interview, she said: ‘I think it’s important to build bridges between high fashion and high street, between the past and the present, between technology and fashion, between art and functionality.’

The mother of two young children is said to be ‘very calm and polite’ and likes to keep a low profile. In a company that is known for its humility and claiming to be ‘hierachy-free’, Ortega’s personality could be a perfect fit to compliment her other obvious skills in running a fashion empire.