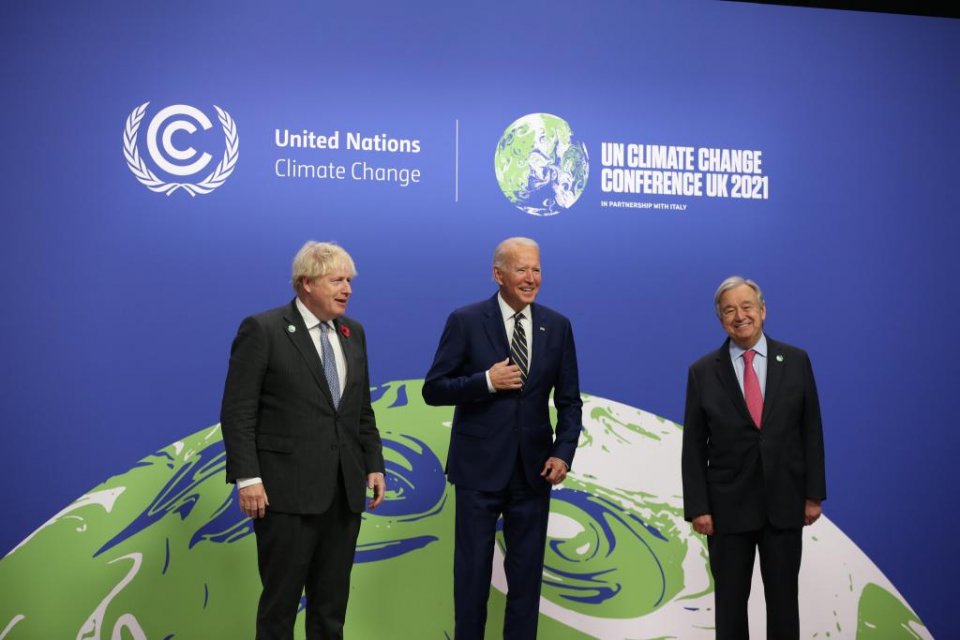 Dozens of countries have joined a United States and European Union pledge to cut emissions of methane – the most potent greenhouse gas – by 30% this decade, in the most significant climate commitment so far at COP26, the UN Climate Change Conference being held in Glasgow.

The initiative, which experts say could have a powerful short-term impact on global warming, followed an announcement earlier on Tuesday in which more than 100 nations agreed to end deforestation by 2030.

‘One of the most important things we can do between now and 2030, to keep 1.5C in reach, is reduce our methane emissions as soon as possible,’ said US President Joe Biden, referring to the central goal of the 2015 Paris agreement.

Biden called the pledge, which has so far been signed by more than 80 nations, a ‘game-changing commitment’ that covered countries responsible for around half of global methane emissions.

‘We cannot wait until 2050. We have to cut emissions fast and methane is one of the gases we can cut the fastest,’ she said.

Heads of state and government are gathered in Glasgow for the leaders’ two-day, high-level summit before the two-week COP26 continues.

British Prime Minister Boris Johnson had opened the conference on a sombre note on Monday by warning that the world is facing an ecological ‘doomsday’, while UN Secretary-General António Guterres said bluntly: ‘We are digging our own graves.’

Johnson opened the global climate summit by saying the world is strapped to a ‘doomsday device’. He likened an ever-warming Earth’s position to that of fictional secret agent James Bond – strapped to a bomb that will destroy the planet and trying to work out how to defuse it.

He told leaders that ‘we are in roughly the same position’ – only now the ‘ticking doomsday device’ is not fiction. The threat is climate change, triggered by the burning of coal, oil and natural gas, and he pointed out that it all started in Glasgow with James Watt’s steam engine powered by coal.

Johnson told the summit that humanity had run down the clock when it comes to climate change, and the time for action is now. He pointed out that the more than 130 world leaders who gathered had an average age of over 60, while the generations most harmed by climate change aren’t yet born.

Johnson called for the end of coal-fired power plants and gasoline-powered cars along with a huge influx of cash from rich nations to poor, in order to help them switch to greener economies and adapt to the worsening climate impacts.

Britain’s leader struck a gloomy note with his opening conference speech, after leaders from the Group of 20 major economies made only modest climate commitments at their summit in Rome this weekend. And that mood got only darker when United Nations Secretary-General António Guterres followed him.

‘We are digging our own graves,’ Guterres said. ‘Our planet is changing before our eyes – from the ocean depths to mountain tops, from melting glaciers to relentless extreme weather events.’

The world leaders’ summit portion of the UN climate conference is aimed at getting agreement to curb carbon emissions fast enough to keep global warming to 1.5C below pre-industrial levels. The world has already warmed 1.1C. Current projections based on planned emissions cuts over the next decade are for it to hit 2.7C by the year 2100.

Earlier on Tuesday, countries made a multibillion-dollar pledge to end deforestation by 2030. But the promise was met with scepticism from environmental groups, and although details were sparse, it appeared to largely resemble a similar pledge made by more than 200 countries and organisations in 2014.

Speaking in Glasgow on Monday, Spanish Prime Minister Pedro Sánchez said that he plans to allocate 1.35 billion euros to the climate fund from 2025 – a 50% increase from the current contribution.