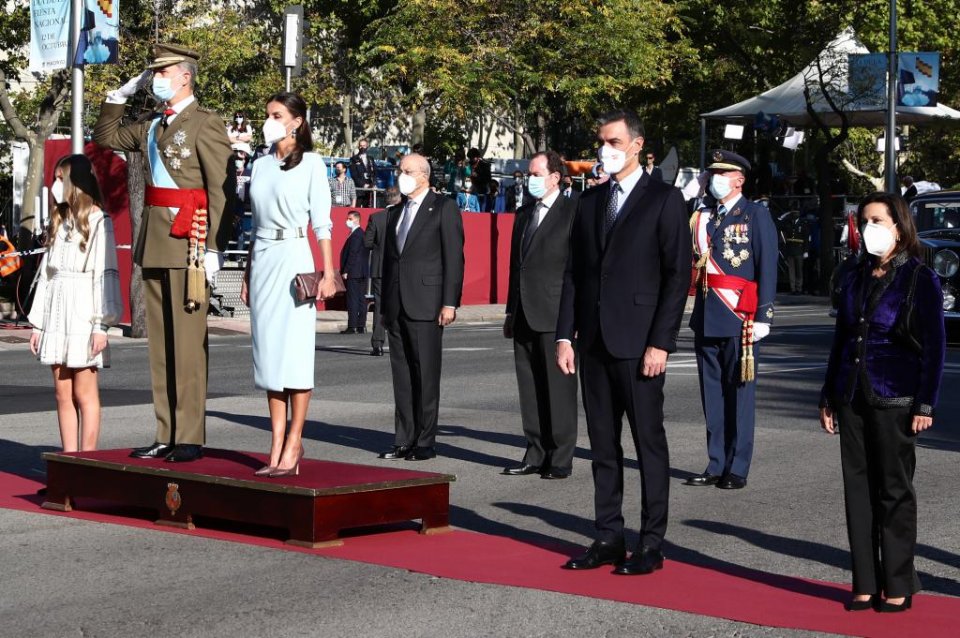 Spanish Prime Minister Pedro Sánchez was booed and jeered by members of the public on Tuesday, when he arrived for Spain’s National Day parade in Madrid.

A grand military parade of more than 2,600 troops took place in front of king Felipe VI, along the flag-lined Paseo de la Castellana, also featuring dozens of aircraft flying overhead and a 21-gun salute. When Sánchez – who leads a coalition government between his socialist PSOE party and the left-wing Podemos group – arrived to stand alongside the monarch, he was booed and whistled at, with some people shouting for him to ‘get out’ and ‘resign’.

Spain’s minority coalition government relies on the support or abstention of MPs of the Catalan independence group, Esquerra Republicana (ERC) and other minority groups. Meanwhile, the right (PP) and far-right (Vox) opposition parties in Spain are highly critical of how Sánchez granted pardons in June to nine Catalan politicians and activists who had been jailed by the Supreme Court in October 2019, convicted of sedition and misuse of funds for their roles in the illegal Catalan referendum of 2017.

Former deputy prime minister and Podemos co-founder Pablo Iglesias used the jeering against Sánchez to criticise the Spanish monarchy. ‘The applause for the head of state and the boos for the government only express the obvious: the monarchy is a political symbol for the right and the extreme right. No one else’s. An institution that only generates adhesion from that part of the country has a very compromised future,’ he tweeted.

The Día de la Fiesta Nacional, also known as Dia de la Hispanidad, is a public holiday in Spain. The 1987 law that made 12 October a national holiday said it commemorates ‘the linguistic and cultural projection of Spain outside of its European limits’. In short, it commemorates the date in 1492 that Christopher Columbus ‘discovered the Americas’ for Spain.

However, some Spanish citizens see the public holiday as a misguided celebration of colonial history, with the centuries-long colonisation of the Americas by European nations having brought violence, disease and death to indigenous people.

Mexican President Andrés Manuel Lopez Obrador has demanded that Spain apologise for the events surrounding the Spanish conquest of Mexico. Spain, however, has ignored his demand.

Despite some questioning the Columbus celebration in Spain, the suffering of native populations during that period has not received the same attention or prompted the kind of historical re-evaluation as it has, for example, in the United States, where in many places Columbus Day has been paired or replaced with Indigenous People’s Day, to switch the focus of the annual holiday.

Protests were also held across Spain on Tuesday in favour of abolishing the Spanish monarchy, and other causes, and staged specifically to coincide with Spain’s national day to voice other grievances.

Regional officials fighting for the independence of Catalonia also went to work as normal on Tuesday, with the Catalan government stating there was ‘nothing to celebrate’.

Around a 1,000 people marched through the centre of Barcelona at various different rallies.

The right-wing PP and far-right Vox parties attended the rally organised by Barcelona per Catalunya Suma with the support of Societat Civil Catalana, which took place on Passeig de Gràcia. Meanwhile, anti-fascist, anti-racist and pro-independence activists gathered at Plaça Universitat to reject the 12 October holiday. The protestors attempted to make their way to Plaça Espanya, near where far-right supporters were demonstrating at another rally on Montjuïc, following a floral offering to the statue of Columbus, but they were blocked off by police.

Last year’s National Day festivities in Spain were cancelled due to the Covid-19 pandemic. Thousands of people turned up for the event in Madrid on Tuesday, however, despite recommendations by health authorities to watch it all on TV to reduce the risk of virus transmission.

For many the highlight of the military parade are the troops from the Spanish Legion who are famous for their quick march and for having a mascot goat.

On Tuesday, a parachutist with a giant Spanish flag landed safely on the Paseo de la Castellana avenue, drawing cheers from the thousands of spectators. In 2019 another parachutist had got caught on a lamp post. Two years before that, in a more serious incident, a Eurofighter jet crashed as it was returning to Los Llanos air base in Albacete, killing the pilot.