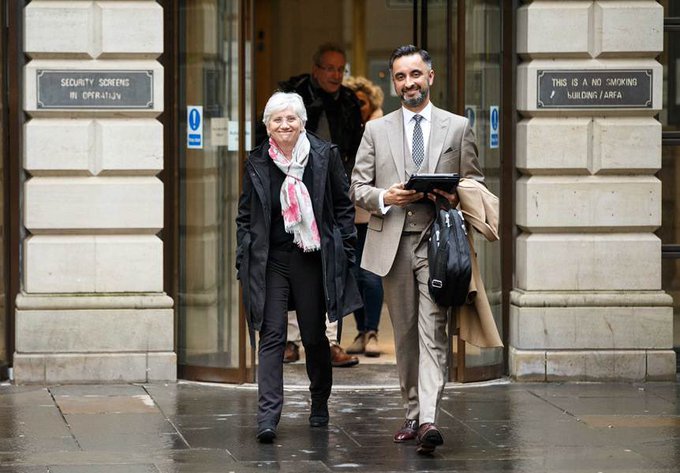 A court in Scotland has dropped the extradition case of Clara Ponsatí, a Catalan pro-independence politician wanted by Spain for ‘sedition’, stating it no longer had jurisdiction.
The extradition hearing on Thursday at the Edinburgh Sheriff Court ended with sheriff Nigel Ross saying that MEP Ponsatí had indicated that she will not move back to Scotland from Belgium, and therefore the Scottish courts have ‘no jurisdiction’.

Sheriff Ross said: ‘You can’t extradite someone who is not here.’ He concluded that extradition was ‘impractical’ and ended the legal action.

The court’s decision on Thursday followed a dispute between Ponsatí’s legal team, led by Aamer Anwar, and John Scott, the lawyer for Scotland’s chief prosecutor, who accused her of disrespecting the court after failing to appear for the hearing.

Formerly an education minister in the Catalan government, Ponsatí was charged by the Spanish courts alongside the then Catalan president, Carles Puigdemont, and other Catalan leaders, for their role in organising an independence referendum in October 2017.

Puigdemont and a number of his colleagues moved to Belgium in October 2017 – in their own words ‘to seek justice and not flee from it’ – after fearing arrest in Spain for holding the referendum that the Spanish government under Mariano Rajoy deemed illegal.

Nine Catalan politicians and activists were eventually jailed for between 9-13 years by the Spanish Supreme Court on 14 October 2019, convicted for crimes of sedition and misuse of funds for their roles in the referendum. They had been found guilty following the high-profile Catalan Trial – with the verdicts causing widespread protests across Catalonia.

In June those nine Catalan leaders and activists walked free from prison, following the pardons granted by the PSOE–Podemos coalition government led by Pedro Sánchez.

Puigdemont and Toni Comín, another former Catalan minister, became members of the EU Parliament in June 2019. Ponsatí, who initially resided in Scotland as a University of St. Andrews academic, became an MEP in January 2020. All three remain in self-imposed exile in Belgium. In late July, all three also lost their parliamentary immunity after the European Court of Justice rejected a provisional ruling that had restored those privileges in early June.

Speaking after Thursday’s hearing, lawyer Aamer Anwar said: ‘For Clara, the European arrest warrant was always an example of judicially motivated revenge by Spain. She maintained that there could be no guarantee of a right to a fair trial after the show trials of nine Catalan politicians imprisoned for 100 years between them and now pardoned.’

1/17 statement – ‘This morning our legal team appeared at court on @ClaraPonsati’s behalf & it was agreed that she should be discharged as a requested person & these extradition court proceedings are now finally at an end in Scotland’🎗 pic.twitter.com/uqjoD50sV6