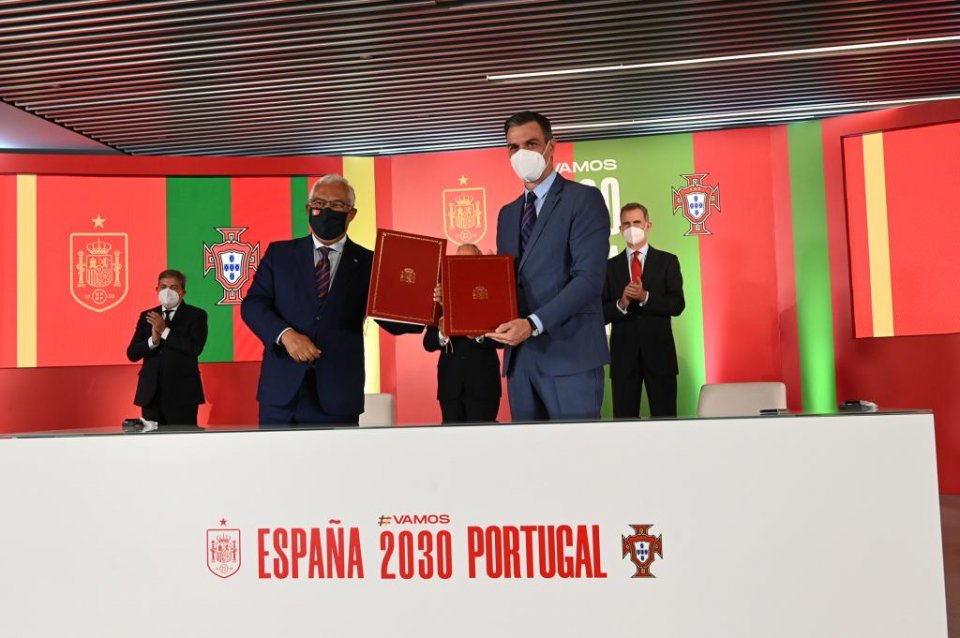 Spain and their Iberian neighbour Portugal recently announced their official bid to jointly host the 2030 World Cup – but they face stiff competition.

The official announcement came last Friday in a small symbolic ceremony at Atlético Madrid’s Wanda Metropolitano stadium, just before the Euro 2020 warm-up between the two nations and which ended in a 0-0 draw.

Support for the bid was expressed in a joint agreement signed by Spanish Prime Minister Pedro Sánchez and his Portuguese counterpart Antonio Costa, stating, ‘the governments of Spain and Portugal wish to express their desire and commitment to host the 2030 World Cup’.

The two leaders signed their accord in the presence of Spain’s king Felipe VI and Portugal’s President Marcelo Rebelo de Sousa. Both teams posed on the pitch wearing T-shirts that read ‘Vamos 2030’.

President of the Portuguese football federation, Luis Rubiales, said, ‘a message to the national federations: if you give us your trust, when you come to our countries you will find an unforgettable experience.’

There are other potential joint bids in the pipeline, including one from the UK and Ireland, and another from Argentina, Uruguay, Paraguay and Chile, meaning the Iberian bid could face stiff competition.

A 2030 World Cup in Uruguay would carry extra sentimental value and historical significance, as it would mark the 100 year anniversary of the first tournament, and Uruguay was where it first took place.

Spain have hosted the tournament just once, in 1982, which saw Italy crowned world champions with Paolo Rossi, who died last December, picking up the awards for top goal scorer and best player. The Italian striker won the Ballon D’Or in the same year. Portugal, on the other hand, have never hosted the tournament.