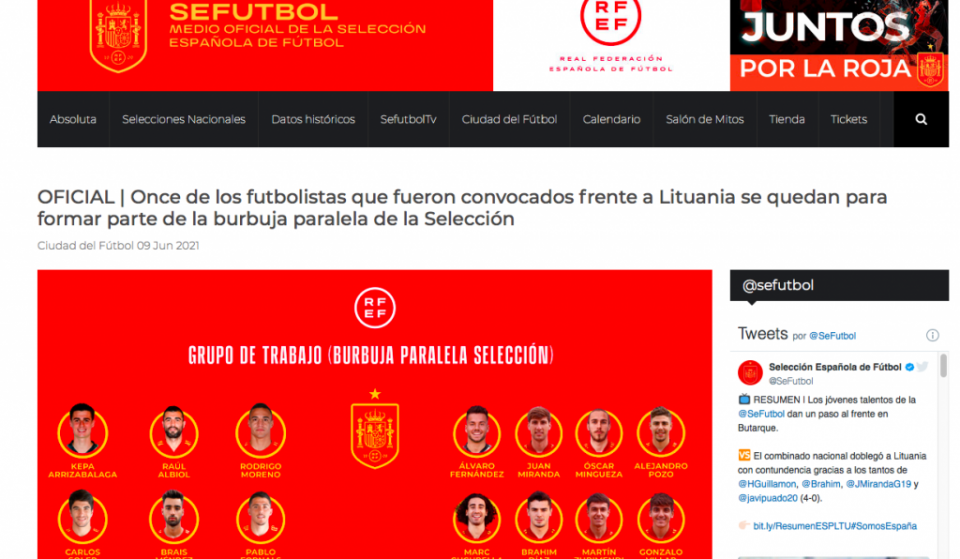 Spain have set up a ‘parallel’ squad of 17 reserves for Euro 2020 who may have to play if the Covid-19 infections among its players spread, the team’s management said on Wednesday.

In a decision announced just hours after Spain defender Diego Llorente became the second player to test positive for Covid-19, the Spanish Football Federation (RFEF) announced in a statement posted on its website that it was setting up a ‘parallel bubble’.

The RFEF said it had called in 11 players to join six back-ups who were already acting as cover for the Coronavirus-hit first-choice squad.

Meanwhile, the Spanish Health Minister Carolina Darias announced on Wednesday that the national team will be vaccinated against Covid-19 by the Spanish Army in the coming days. There had been some criticism for the delay in getting players vaccinated, but also criticism for allowing soccer players to be vaccinated before other Spaniards who are in line for the jab.

Captain Sergio Busquets tested positive on Sunday, just a week before Spain open their Euro campaign on Monday, playing Sweden in Group E in the southern city of Sevilla.

Sweden’s Euro 2020 squad has also been hit by infections, with two players testing positive, its federation said Tuesday. Since Busquests tested positive, Spain’s entire Euro squad has been in isolation.

Players who test positive must stay in isolation for at least 10 days, meaning both Busquets and Llorente will miss the opening game against Sweden. It would also be unlikely they would be fit for Spain’s second match against Poland on 19 June. The team’s final Group E match will be against Slovakia on 23 June, also in Sevilla.

The 11 newcomers were part of an Under-21 team that beat Lithuania 4-0 on Tuesday evening in Spain’s final warm-up match ahead of the Euro.

‘The coaching staff of Spain’s national team have decided 11 internationals initially called up for the match against Lithuania will remain part of the senior national team,’ it said.

‘This group of internationals will join their teammates … within a parallel bubble, created in anticipation of the possible consequences that could result from the positive [Covid tests] of Sergio Busquets and Diego Llorente.’

The 17 reserves in their separate bubble will have no contact with the main Euro 2020 squad.

The Euros begin on Friday when Italy hosts Turkey.