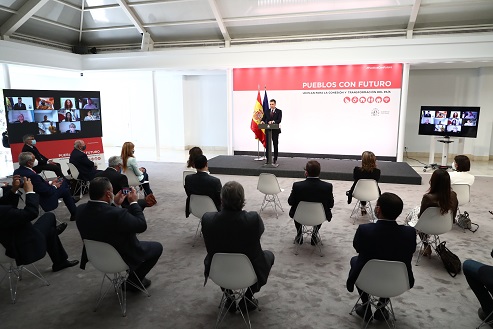 Spanish Prime Minister Pedro Sánchez has presented an ambitious plan to create economic growth and social benefits in the country’s villages and rural locations, that have historically struggled against a backdrop of decreasing populations as people have migrated to cities.

The ‘Action Plan to Meet the Demographic Challenge’ was presented to mayors of small towns and local representatives at an event at Moncloa. The plan lays out the framework of 130 measures that aim to bring social cohesion and promote urban-rural connections to reactivate social and economic benefits in rural areas. [You can click here for a full PDF in Spanish of the plan].

The plan involves an investment of 10 billion euros to support small towns with their strategies to generate economic growth, in line with the government’s Recovery, Transformation and Resilience Plan.

Sánchez stressed that the country’s 8,131 villages should all offer opportunities for hope, saying ‘we are not going to squander any of them, not a single one. Because each of them represents what we want Spain to be. Our identity, our strength and our possibility for the future’.

Entrepreneurship and innovation are highlighted as priorities in the plan, in order to attract talented people to rural locations, when previously they had migrated to cities.

The plan has been developed to address the increasing levels of depopulation of rural Spain, which is happening at the highest rate than for any other European country.

There are huge regional differences across Spain, between urban and rural environments. The country has some stark data that reflects this, with 90% of the population living in just 12% of the geographic territory.

A total of 80% of Spain’s territory is a large rural zone, known as ‘la España vaciada’, meaning ‘emptied Spain’.

As part of the government’s plan, a focus on attracting international tourism to rural parts is also encouraged. Sánchez highlighted this during the presentation, saying ‘I would especially like to emphasise that tourists should enjoy the rich rural tourist attractions that our country has, one of the jewels in the crown’.

Another integral part of the plan is to improve digital connectivity for rural locations, particularly to assist holiday companies to promote expanding sustainable tourism.

The plan outlines 10 lines of action that revolve around ecological and digital transition, territorial innovation, sustainable tourism, equal rights, the promotion of entrepreneurship, public services, social welfare and the promotion of culture.

The plan also highlights the importance of ensuring dialogue between urban and rural areas, eliminating gender gaps and giving women and young people a bigger role in securing the future economic growth of rural locations.

Explaining that the plan is an important part of the country’s recovery from the pandemic, Sánchez said that ‘we wanted the Recovery, Transformation and Resilience Plan to begin to be deployed in rural areas first, in the territory, because we want this territorial cohesion perspective to be fundamental in the rollout of this plan that is going to modernise our country’.

Sánchez and his government’s support for rural areas will be warmly received by the population located there who have previously protested about the lack of opportunities in the forgotten areas of ‘emptied Spain’.

The plan will be seen as a step in the right direction to address the inequalities that have existed between urban and rural communities and its success will be integral to the country’s plans to return to economic growth.

‘Votes for life’ for British citizens living in Spain