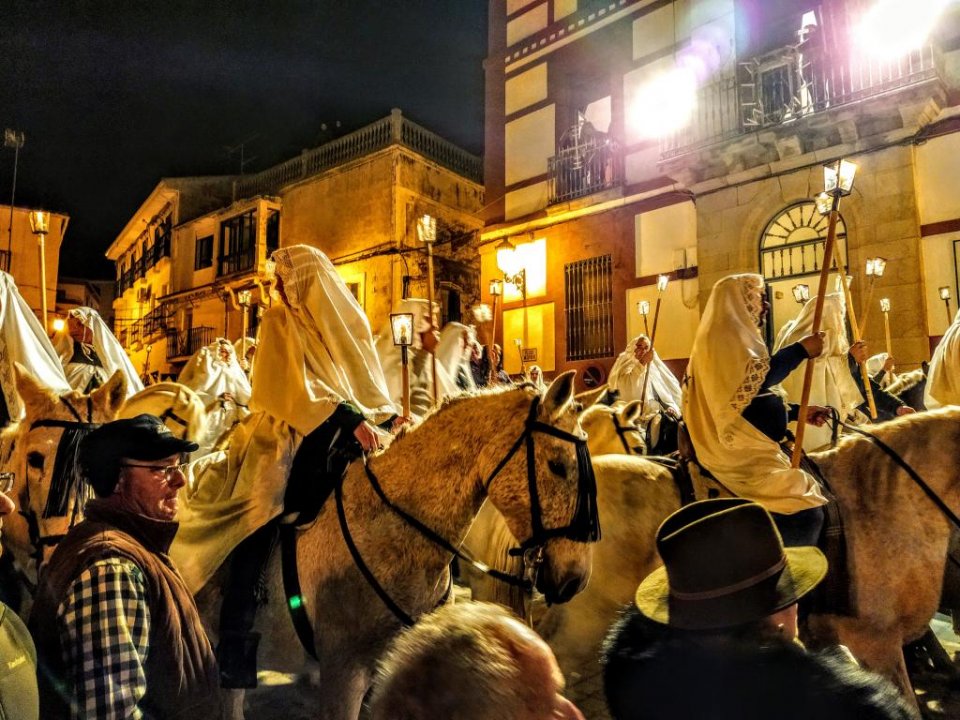 Hemingway never made it to Torrejoncillo. But then again, whoever did? Even among the Extremeños, it is not known to be a village that receives visitors. A forty minute drive from Cáceres, and tucked away among the hills, there are no monuments or sites of interest here amidst the old and narrow streets of less than 3,000 inhabitants.

That is not to say it’s not a nice place. Like any other small town in Spain, it has a certain charm, one that consists of a large church whose bells chime every hour in the Plaza Mayor, and a small handful of modest bars and cafés where a bit of loose change goes a long way in the pursuit of beer, wine and tapas.

It is, perhaps, only for the fact that Torrejoncillo is so remote and poorly connected to any major city that its festival remains unknown outside of Extremadura. Yes, Spain is overflowing with festivals, but how many people can say they’ve been to one where they fire shotguns into the air, get invited into the houses of locals to drink their home-made wine, and participate in the hysterical mass worship of a white piece of cloth that is hoisted up on a stick and waved above crowds of thousands, provoking cries of ‘Viva María Santísima!’ and bringing people to tears?

If it hadn’t been for Hemingway’s novel The Sun Also Rises, in all likelihood, Pamplona’s running of the bull festival would have remained just as hidden and ignored by the outside world as any of Spain’s other alcohol-fueled bull-runs. But its proximity to France enabled it to catch the attention of some American bohemians in 1920s Paris, and boom, the rest is history. Torrejoncillo, on the other hand, remains about as untouched by outsiders as anywhere can possibly get in a country that relies on its visitors. Perhaps that’s why its festival, La Encamisá, feels so distinct in addition to the guns, wine and worship.

Every year on 7 December, the eve of the biblical ‘Immaculate Conception’, the Encamisá festival takes place in Torrejoncillo. Early in the evening, the bars begin to fill before crowds of thousands gather in the main square and its surrounding streets where they await the start of the parade. At 10pm it begins, as local men on horseback ride slowly through the town’s streets, each of them draped in a long white cloth covering their backs and heads. In their hands, the horsemen carry old torch lights on long wooden poles, lighting up their route as people watch on from their balconies or the crowded areas below.

Amidst this parade, a white banner which bears an embroidered image of the Virgin Mary, hoisted up and onto the end of a long stick, is waved from side to side by one of the horsemen. As the banner arrives, cries of ‘viva la reina del cielo’, ‘viva nuestra madre’ and ‘viva María santísima’ can be heard all around, as people thrust their arms towards the banner in an act of worship.

The most distinct feature of all this, has to be the abundance of shotguns, held by hundreds of locals and constantly fired up into the air throughout the night to accompany the on-going religious ritual. Another surprising sight, at least to the eyes of an outsider, is the number of people who are brought to tears by the scenes in front of them.

Throughout the night and into the early hours, a lot of drinking goes on. Crowds flow in and out of local bars for beer, wine and cubatas, and partake in botellones (drinking your own booze outside with friends) on every street.

One of the highlights of all this is the friendliness, generosity and trust shown from the locals. Villagers who live on the ground floor keep their doors open to invite in random passers-by to try their home-made wine, a strange dark orange coloured liquid made from locally grown grapes. It’s also here where one can expect to be offered some home-made coquillos, a sweet and sugary biscuit with a moist and sticky texture.

At 1.30am, all flock back to the Plaza Mayor and towards the Iglesia de San Andrés Apóstol to await the arrival of the banner. Once it’s carried into the church and waved from side to side above the crowds, the yelling of religious phrases returns, as do the tears. This is the peak moment of the Encamisá – but what follows is well worth staying out for. Bonfires are lit in the middle of the streets where people congregate for barbecues and, yes, more drinks.

Where does it come from?

Aside from being outright bizarre, the Encamisá is a mystery. No one knows for sure where it came from. But there are a number of theories.

Some historians say that its origins predate the arrival of the Romans and that the Encamisá was oringinally, in fact, a festival paying homage to the ancient Iberian goddess Ataecina, with Catholic elements added later.

Others suggest that it came about after the nearby city of Coria suffered a siege in 1465. A different theory is that it started as a celebration for locals who participated as soldiers in the Flanders War of 1585.

The most widely accepted theory, however, points to the Battle of Pavia (1525) in which many Spaniards helped the Italians defeat the French in battle. It is said that when heading into battle, Alfonso de Ávalos, who was a Torrejoncillo local, camouflaged his men in white sheets to keep them hidden in the snow, helping to bring about their victory.

Cáceres in ‘Game of Thrones’ – where all the action happened