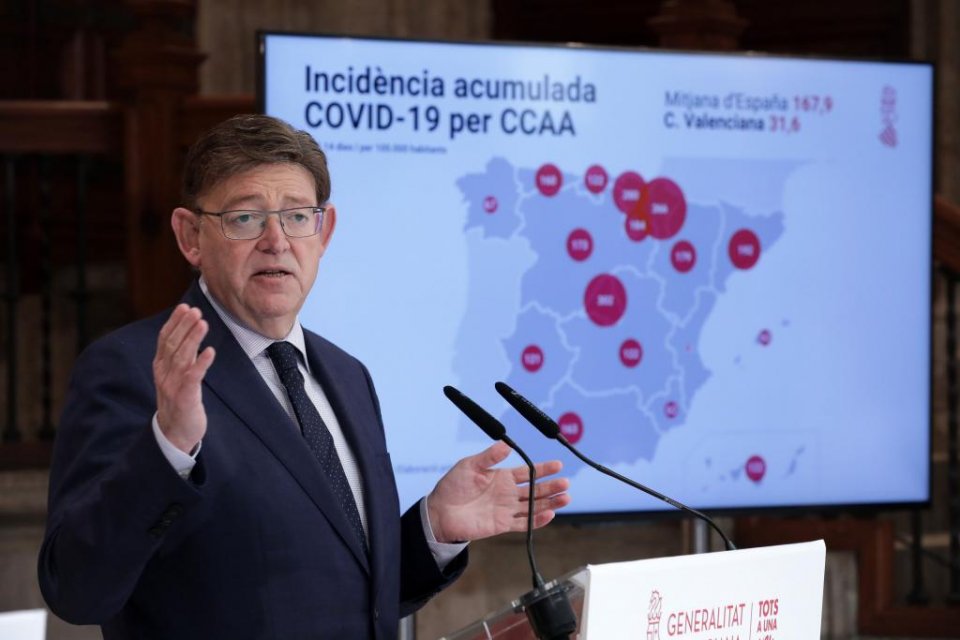 From Monday two households will be able to meet up in private, while in public places up to six people will be allowed to meet, such as in bars and restaurants, as well as groups for doing sport. There will also be some relaxation around visits to elderly people in residences who have been vaccinated. These are the main changes which will come into effect from Monday 12 April and will last until Sunday 25 April.

The rest of the current restrictions, which include the perimeter closure of the Valencian region and the nighttime curfew between 10pm and 6am, will be extended for 15 more days.

Puig explained that the relaxation of restrictions in residences was possible as 100% of residents had now been vaccinated, along with practically all the social and healthcare workers, as well as 95% of over 80s.

He also told journalists at the briefing that 25 days ago the Valencian region brought in ‘the toughest framework of restrictions’ of Spain’s 17 autonomous regions, and that as a result the circulation of the virus has been cut in half. He said that Valencia continues to have the lowest cumulative incidence rate nationally (and five times lower than the national average) as well as being lower than any European country.

He said that the interdepartmental group would meet again on 22 April to review the situation and also said that Spain’s Prime Minister, Pedro Sánchez, had expressed his intention not to extend the State of Alarm when it expires on 9 May, and this being the case the perimeter closure would be lifted beforehand.

Puig continued: ‘Finally we have control of the pandemic situation for the first time since the beginning of last summer’, and he thanked Valencians for their ‘effort, responsibility and sacrifice’ and the ‘admirable work’ of healthcare professionals.

‘For the Valencians, the worst of the pandemic is over, we are coming out of the tunnel and we can see much more than the light.’ However, he also said that more vaccine doses were needed: ‘Only with universal vaccination will it be possible to overcome the pandemic, and the Valencian government will defend this position wherever necessary.’

Puig’s words about universal vaccination come at the end of the week in which he wrote to the European Union Regions Committee, calling for compulsory licensing of Covid-19 vaccines which would force pharmaceutical companies to share their research and allow more vaccines to be produced. An EU spokesman said on Tuesday that the EU didn’t believe suspending patents for Covid-19 vaccines would resolve the current problem of access to vaccines and that they prefer to encourage collaboration between pharmaceutical companies to increase global production capacity. He added that it was necessary to find ways to maintain incentives for research and innovation.

More than a million doses of Coronavirus vaccines have now been administered in the Valencia region. As of Friday, 1,040,320 doses had been given with the regional distribution as follows: 122,803 in Castellón, 370,455 in Allicante, and 546,774 in Valencia.

An additional 17,000 doses of the Moderna vaccine will be administered to people with conditions of risk and those using preventative medicine services. But the health department has reiterated the importance of not turning up at a vaccination centre without an appointment.

A freephone telephone service, 900 300 555, has been set up to answer any queries or worries about inoculation. Alternatively you can find information about the vaccines and the procedure, update or check your contact details to ensure receiving an SMS when your turn comes, as well as print a Covid vaccination certificate here: http://coronavirus.san.gva.es/es/web/vacunacion/inicio

There have been 42 new outbreaks, compared to 40 last week, 26 of those related to socialising, four work-related and two related to education.

As of Friday, Valencia’s hospitals had 377 people admitted for Covid-19, just slightly fewer than last week’s 385 and there were 74 needing intensive care treatment, compared to last week’s 88.

On 13 April it will be 13 months since the start of the first State of Alarm which saw Valencia’s nightlife industry closed. And 13 months later, the sector is still waiting for desperately needed help in the face of business closures and job losses caused by the restrictions on pubs and clubs.

On Tuesday (13 April) members of the sector plan to camp out outside Valencia’s Palau de la Generalitat, to demand realistic financial help which they say the government has failed to provide. CEOH (Coordinadora de Oico y Hostelería), which supports the businesses in their action, claim their fight is just and necessary as theirs is the only sector which was closed by legal imperative.

They say they will not move until they have a financial rescue plan on the table which CEOH puts at 50 million euros to guarantee the survival of the almost 1,100 companies in the sector which remain open.

Following last Sunday’s Cádiz–Valencia fixture where the visitors walked off because of supposed racist insults against one of its players, the Spanish football league, La Liga, has found no evidence of racism.

The Cádiz player Juan Cala was alleged to have called Valencia’s Mouctar Diakhaby ‘negro de mierda’. The Frenchman walked off in protest and his team mates followed shortly afterwards in solidarity, however, half an hour later the whole team were forced to come back out onto the pitch after allegedly being told three points would be deducted from the club if they didn’t return.

Cala denied all the charges, saying the Valencian centre had ‘invented’ it or had ‘misheard’.

After spending the week reviewing all the images, cleaning audios and lip reading footage of the players involved, La Liga found nothing to support the allegations, but reiterated its condemnation of racism in all its forms and said it was committed to the constant fight against it.

In the minds of Valencia fans and players, however, there is little doubt that the incident occurred, but as far as the league is concerned the matter has been investigated and is now closed.

As finding places that welcome dogs gets harder and harder, a group of Valencian entrepreneurs have launched DoggieSnax – De tapas con mi perro, a fun selection of menus for dogs. At the moment the special menus for canines are on offer in Denia, at a selection of establishments, but the idea is to expand throughout all of Spain.

Helga, who runs Koira, a dog training centre, explained that the idea came about when a dog walking route ended with tapas on a restaurant terrace and they were offered menus for dogs which went down a storm.

She explained: ‘Incorporating menus for dogs in bars, cafes and restaurants doesn’t affect restrictions on capacity, doesn’t require an increase in capacity for establishments, there’s no increase in the workload or fixed costs. But it can help generate more business without a large investment.’

DoggieSnax also hopes to promote dog friendly venues on its platform where dog owners can find establishments which welcome their four-legged friends: https://detapasconmiperro.com/

Prince Philip, the Duke of Edinburgh, has died, aged 99

I can’t donate as your system insists I create a PayPal account which I don’t want.
Wish to donate by credit card but system seems to link to PayPal. Please break this link and allow donation without PayPal.

Hi Vincent – thank you for the comment. We have also sent you an email. It is not actually required to set up a PayPal account to donate. It can be done by simply choosing the ‘Donate with a card’ option, after selecting the amount you’d like to donate. Thank you very much for thinking of supporting us.