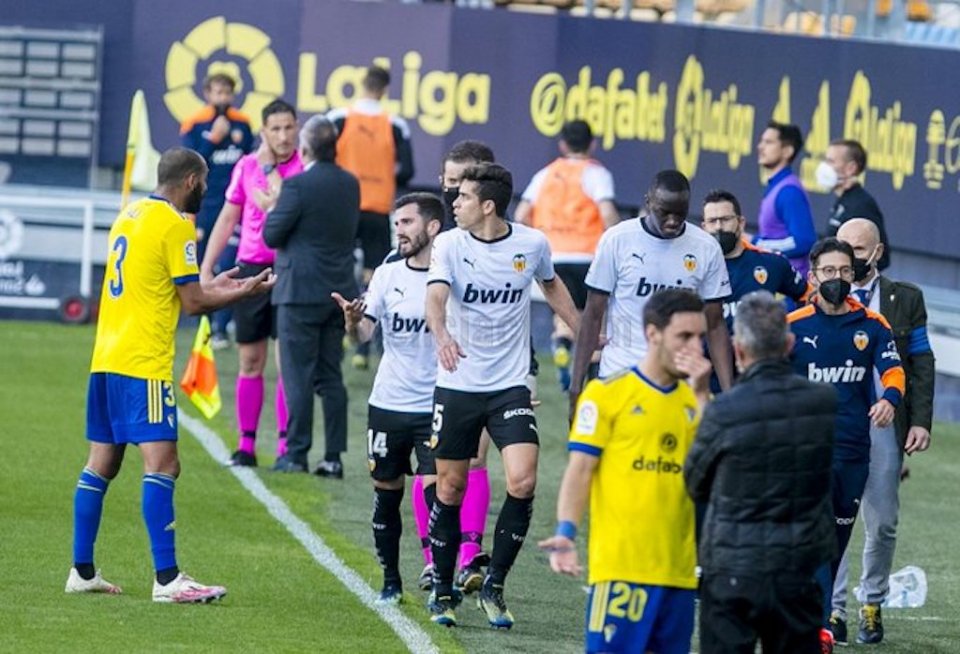 Cádiz’s 2-1 victory over Valencia on Sunday was overshadowed by an alleged incident of racial abuse that saw Valencia’s players walking off the field in protest, only to return 20 minutes later to finish the match.

Cádiz’s Juan Cala got into an altercation in the first-half with Valencia’s Mouctar Diakhaby, leaving the French defender furious about what had been said to him. After moments of passionately discussing the issue with the referee, Diakhaby and his Valencia teammates left the field in protest, before returning after being informed that failing to do so would result in a forfeit of points.

Valencia’s captain, José Luís Galá, led his teammates off the field before their return but Diakhaby watched the rest of the game from the stands. Cala was substituted at half-time.

Cala and Diakhaly clashed after going in for a challenge at the same time. Moments later, whilst both footballers were walking away, Diakhaly was seen running back to confront Cala. Teammates Kevin Gameiro and former Arsenal man Gabriel Paulista tried to calm the Frenchman down. According to numerous sources, the Brazilian defender is said to have been seen saying to Cala, ‘You can’t say negro de mierda,’ which in English translates to ‘black sh**.’

Although Spanish referees have the right to stop games in the event of racist abuse, the match later restarted.

Valencia posted the following announcement on Twitter: ‘No to racism. All our support to Mouctar Diakhaby – we are all with you. The player who received the racist insult has asked his teammates to get back on the pitch and fight [continue fighting to win the match].’ Later, the club also posted an official announcement [click here to read it in English].

Valencia, who went on to lose the game 2-1, are expected to make a formal complaint to either La Liga or the Spanish Football Federation.

The return to domestic football after the international break also saw league leaders Atlético Madrid suffer a 1-0 away defeat to Sevilla. After leading the table by a large points gaps for the last few months, Atlético are now only three points clear above Real Madrid.

It was a game that Sevilla dominated, having most of the possession and mustering up a total of 23 shots against Atlético’s 13.

Despite Lucas Ocampo having an early penalty saved by Atléti’s shot-stopper Jan Oblak, Argentine defender Marcos Acuña headed in a cross from former Manchester City man Jesus Navas to give the Sevillanos the lead in the 70th minute, a lead that would settle the tie.

If Barcelona win their game in hand tonight [Monday] against Valladolid, they will move above Real and end up just a single point behind the not-long-ago run-away leaders.

Elsewhere, Real Madrid bagged a comfortable 2-0 victory at home to Eibar – with Marco Asensio and Karim Benzema getting on the score-sheet and ensuring that they keep the pressure on their local rivals in the title race.

Atlético are still on top, but for many people this weekend’s results mark somewhat of a turning point. The closing of the points gap means that Atlético could lose their lead with another slip up. The comfort zone has been pulled away from them.

This has also been reflected by most of the bookmakers who have just started to make Barcelona the slight favourites. With only a few weeks left, it’s all up for grabs now.