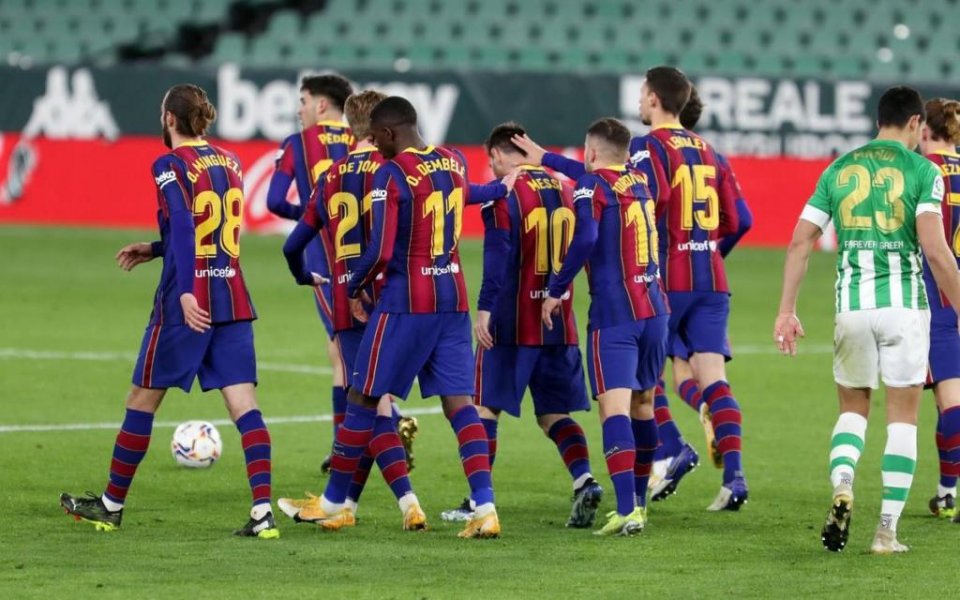 Lionel Messi came off the bench and made an instant impact by scoring in less than three minutes as Barcelona came from behind to see off Real Betis at Benito Villamarín.

Borja Iglesias put Betis ahead in the 38th minute with a close-range effort that came from a quick counter-attack to catch Barcelona off guard.

The Catalans finished the first half trailing the Andalusians and seemed to lack the spark that was needed to find the back of the net.

It was, perhaps, for that reason that Ronald Koeman decided to bring Messi on from the bench after having decided to give him a rest at the start.

The rest was short-lived, and it is fair to say that when called upon for his magic, Messi answered in style. The Argentinian stepped onto the pitch in the 57th minute and got on the score-sheet in the 59th, firing into the bottom right corner with his left foot from just inside the box.

The introduction of Messi caused all sorts of problems for Betis, and just nine minutes after his equaliser, it was the record goalscorer’s quick feet, dribbling skills and delivery from the left wing that resulted in an own goal from Victor Ruiz, putting Barça in front.

But Betis would not go down without a fight, and Ruiz was quick to redeem himself by scoring in the 75th minute, this time in the correct goal, after he leaped above the Barça defence to head in a pefrect cross from Fekir’s free-kick taken from the edge of the left side of the box.

Three minutes from time, a sloppy Betis attempt at a clearance was pounced on by Barça’s Machado Trincão, whose unstoppable effort went in off the bottom of the crossbar.

It wasn’t the first time of the week that Barcelona had left it late to avoid an upset. A thrilling encounter on Wednesday evening almost saw them knocked out out of the Copa del Rey by Granada.

Goals from Kenedy and Roberto Soldado gave Granada a two goal lead that remained in tact all the way until the 88th minute when Antoine Griezmann pulled back what seemed like a late consolation from a tight angle, before Jordi Alba headed in the equaliser in stoppage time, forcing the game into extra time.

The momentum was with Barça as extra time began and Griezmann was quick to get on the score-sheet again, this time with his head, putting his side in front for the first time of the game.

Yet Granada showed a lot of spirit and fought on, drawing level again in the 103rd minute through a Vico Villegas penalty.

The second half of extra time, put what would have been a dream win for Granada to an end, as De Jong tapped in Barça’s fourth before Alba wrapped it up on 113 minutes with a powerful strike from the left that landed up in the roof of the net.

Barcelona are now through to the semi-finals of the Copa del Rey and have closed the gap on Atlético Madrid in La Liga to seven points. Atlético do, however, have two games in hand and are on their finest form for years.

Real Madrid are level with the Catalans on points, and picked up three points on Saturday with a 2-1 away win over Huelva. Although it was not the most convincing of scorelines, they’ll be glad to have responded to the misery of last week’s defeat with a victory.

Post-Brexit and Covid, is the toughest transition still to come for Brits on the Costas?