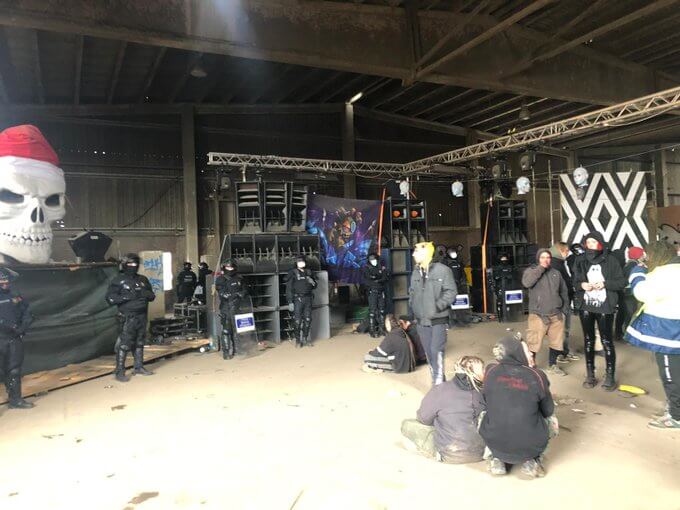 Catalan riot police finally broke up a New Year’s Eve rave that was taking place in an abandoned warehouse in Catalonia on Saturday, and where around 300 people had already been partying for over 40 hours.

The rave had begun on New Year’s Eve in the village of Llinars del Vallès, about 30km north east of Barcelona. Images on social media showed the revellers partying without any regard for social distancing or safety restrictions, aimed at stopping the spread of Coronavirus.

The maximum number of people allowed to gather and celebrate New Year’s Eve in Catalonia had been 10 people due to Covid-19 from no more than two different social bubbles. Nighttime curfews are also in place. [Also read: Restrictions in Spain for Christmas and New Year period].

The rave had prompted complaints from neighbours in Llinars del Vallès due to the loud music. One of the main associations of nightlife businesses, FECASARM, urged shutting it down, given that all nightclubs and music bars have been ordered shut since August, even if complying with health measures, ‘while a completely illegal activity and without any safety measure continues without anyone taking action’.

In a sequence of posts on Twitter, the Catalan police (Mossos d’Esquadra) said they had confiscated the sound system and all the other equipment used at the party and would be pressing charges against all who were involved. The latest post from the Mossos stated that ‘215 people have been reported so far’, with ‘two people arrested and five more under investigation’.

‘We will prosecute the organisers and all the partygoers,’ police said, stating that the penalty for attending such an event started at 3,000 euros. ‘The organisers of the illegal party in Llinars have been arrested and they will appear in court in the next few hours,’ they said, adding that they could face a penalty of up to 600,000 euros.

At the scene, a police helicopter had circled overhead as hundreds of police entered the warehouse, with a large crowd of onlookers nearby. Images of the raid on social media showed a large group of people dancing in front of a huge skull wearing a Santa hat, all of them in close proximity with no face masks, and many smoking. When the police arrived, there were brief scuffles.

Some media reports claim that many of the revellers had come from France and elsewhere in Europe. When questioned why the operation to break up the rave only began around noon on Saturday, police said it was a complex operation and that they didn’t want to move in until they were able to ensure the safety of officers and partygoers.

UK and Spain reach ‘principle of agreement’ over Gibraltar