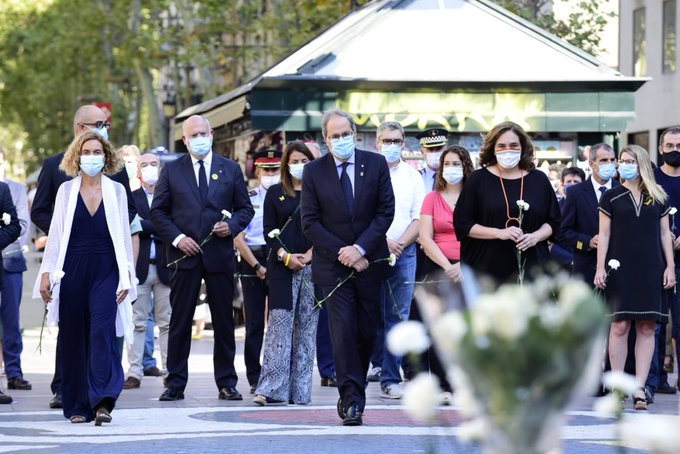 A ceremony was held in Barcelona on Monday, for the third anniversary of the terror attacks that took place there on 17 August 2017, as well as in the town of Cambrils, which left a total of 16 dead and more than 140 people injured.

Most of the casualties took place on Barcelona’s famous La Rambla boulevard, after a van was driven at speed by Younes Abouyaaqoub through the middle of the pedestrianised area in the centre of the street. He was shot dead by police four days later.

The attacks had been orchestrated by a jihadi group based in Ripoll, under the town’s imam Abdelbaki Es Satty, who died with other members in an accidental explosion in an apartment in Alcanar on the eve of the attacks.

Several hours after the attack on La Rambla in Barcelona, five of his accomplices drove into more pedestrians and stabbed a woman who later died of her injuries in Cambrils, a seaside resort 100km to the south. All five were shot dead by police.

The terrorist cell had been planning attacks on a large scale involving explosives, with sites such as the Eiffel Tower in Paris and the football stadium of Barcelona among alleged targets. But the accidental explosion in Alcanar pushed the group to quickly improvise the two attacks in Catalonia.

On Monday in Barcelona, dozens of relatives of the victims – all wearing face masks and maintaining social distance because of the Coronavirus pandemic – laid white carnations on La Rambla boulevard.

Catalan president Quim Torra, Barcelona Mayor Ada Colau and Spanish Health Minister Salvador Illa were all in attendance, as well as many other representatives from political groups and institutions.

In January this year, Spain’s National Court announced they would be trying three of the terror attack suspects for terrorism, but not murder – and the trial is expected to begin in the coming months.

The court said there was not enough evidence to attribute a direct role to the three men in the deaths of the victims who died in the attacks in Barcelona and Cambrils.

Mohamed Houli Chemlal and Driss Oukabir were arrested after the attacks and have been in preventive detention since August 2017, while Said Ben Iazza has been in custody since September 2017.

Spain’s public prosecutor confirmed on 23 July that it would request a 41-year sentence for Houli, the only survivor of the explosion in Alcanar, for allegedly being involved in planning the attacks and preparing the bombs.

For Driss Oukabir, brother of one of the terrorists shot dead by the police, the public prosecutor requests 36 years behind bars, and for the third accused, Said Ben Iazza, it requests a 8-year sentence.

The Spanish Congress has repeatedly denied an investigation committee on the attacks.