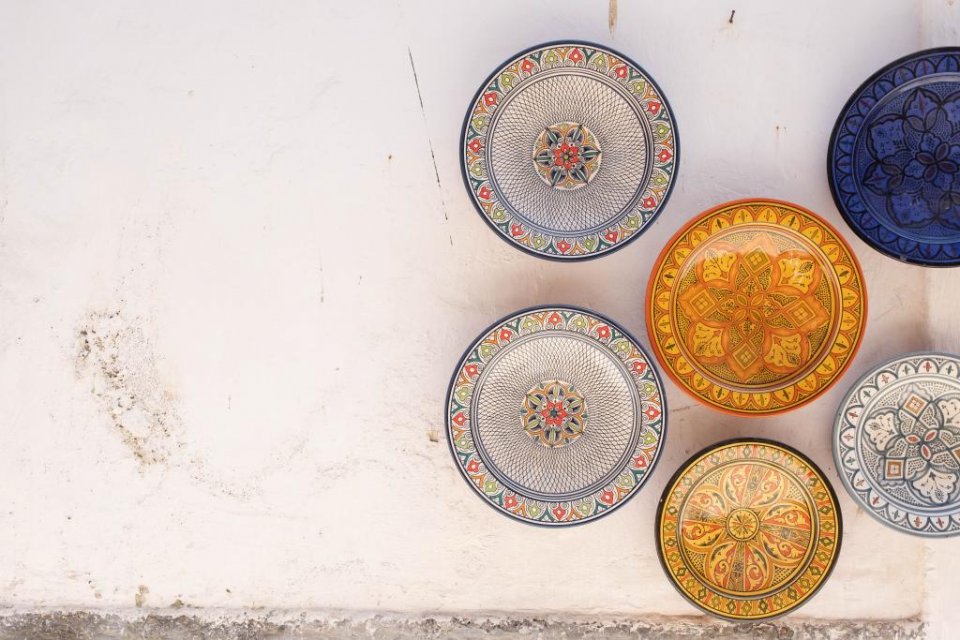 Food is a doorway to the past and a snapshot of the present. An amalgamation of history, culture, memory, joy and nourishment reflecting what, why and how a culture eats.

Like so much else in Spain, its food is as rich and varied as its topography, its names, preparations and oral traditions an interwoven narrative of place and time. From the Phoenicians to Romans, Greeks to Moors, Jews to Christians, understanding Spain’s food is like deciphering a millennia-old edible riddle. And when paired with the perfect local spirit, the experience is elevated to a whole new dimension.

So I set out (pre-Covid) with a simple yet beguiling objective: to understand Spain through six perfectly paired dishes. Eat them. And write about them. In no particular order.

Andalusia’s name alone gives me chills. The heart of a Moorish civilisation for nearly eight centuries, signs of a glorious al-Andalus past remain alive in music, architecture and nearly every spoken word, from aceituna to zahora.

Blue fin tuna has been caught along the southern Andalusian coast since the time of the Phoenicians, yet it was the Arabic word al-madraba that Spaniards adopted to describe the ancient practice of this highly skilled catch.

Cured in salt for 2 days and let to dry in the sun and wind for 3 weeks, the tuna obtains a flavour profile unlike any cured meat I’ve ever tried. Now a deep burgundy colour and called mojama, it’s perfectly firm, the sea air lending an intense salty-smoked quality.

Andalusians are described as salao, slang for ‘salty’ – their generous, boisterous character filled with joy, hyperbole and wit. So a salt-cured tuna, delicate yet with bite, seems perfectly fit. I wash it down with an ice cold glass of fino sherry. A British appropriation of the nearby town Jerez, sherry is aged in barrels of American oak whose porous surface allows the cool Atlantic air to seep through and lend its characteristic flavour.

Sherry is produced with only three grape varietals, fino being the driest and made with the Palomino grape. A cap of yeast during the ageing process prevents direct contact with the air, lending a yeasty, saline profile with notes of Mediterranean herbs, fresh dough and almonds. It cuts through the fatty tuna like a knife. A homage to the elements. So simple, so complex.

Eduardo Sousa is nothing short of a pioneer. In a world characterised by the gavage method of force-feeding geese by pumping them with fat, Eduardo has literally re-written the game.

His love of land is matched by an encyclopedic knowledge of his craft. He explains that the origins of foie gras in Spain come from Jews living in Egypt who settled in the Iberian Peninsula prior to Roman rule. Accustomed to handling geese and not pork, Jews mastered the art of making foie as well as curing meats well over 2,500 years ago, a tradition Eduardo has graciously inherited.

Understanding that geese naturally build fat deposits in their liver which serve as reserves on their annual autumn migration, Eduardo has devised an ingenious set of circumstances that trigger fat production. If that wasn’t enough, he was awarded best foie gras in the world in Paris in 2006 and hailed the ‘best foie I’ve ever tried in my life’ by chef Dan Barber of Blue Hill at Stone Barns. The French were aghast.

My mouth had been watering for at least 12 hours before picking up a fork. Fed on the nutty acorns of Extremadura’s dehesa, in addition to figs and seeds from the yellow bush lupine, Eduardo attains the characteristic yellow hue traditionally achieved through the force-feeding method. The result is a masterful consistency of texture and complexity. Luscious. Creamy. Heaven. Melts in your mouth is an understatement.

Knowing these animals were treated with dignity makes it that much better. I eat them atop rice crackers with orange marmalade and pair with a glass of La Pintada, a young semi-seco sparkling wine from the region, elegant and zesty enough to hold its own. It feels like my birthday.

For about six weeks per year in late fall, all Catalans talk about is foraging for, preparing and eating rovellons. Meaty. Tender. Woodsy. Like the majority of Catalan and Mediterranean cuisine, high quality products are best when left alone.

So many of my most memorable meals in Spain were grilled with salt, pepper and rosemary, or sautéed with extra virgin olive oil, garlic and parsley. The simplicity of approach gives space for the palate to appreciate just how good the raw product is. Rovellons are no exception and in some years can fetch up to €45 per 0.5kg.

Cutting into the yellow-brown flesh releases a reddish juice, an incredible display of fall foliage on my plate. I’ve come to Subirats, a small village in El Penedès in the heart of cava country, located just an hour from Barcelona city centre.

I pair with a Gran Reserva cava. Aged a minimum of 36 months, the fruit, acidity and breadiness are in perfect balance, reflecting the patience and thoughtfulness of the Catalan character. Accounting for only 2% of cava’s yearly production, the 36 months on the lees allow the bubbles to mellow, and they disintegrate effortlessly. Now I understand why Catalans drink cava with breakfast, lunch and dinner. I order another round.

Food is arguably nowhere more important in Spain than in the Basque Country. Robust. Opinionated. Heavily moustached. The Paul Bunyans of Spain.

Basques claim to have never been conquered and never freeze their seafood. A seafaring people of the north Atlantic, their intensity and passion for life are channeled directly into the kitchen where ingenuity, creativity and transformation take over.

Home to more than 1,500 txokos, or ‘welcoming corners’, these men-only Basque institutions give Michelin star restaurants a serious run for their money. Home to 18 Michelin stars within a 15 mile radius, San Sebastian boasts the highest concentration anywhere in the world.

But txokos are not only about the chow. Like their constituents, they are fiercely social. I’ve come to Bilbao to eat the prized chuleton rib steak, aka the best piece of meat you’ll ever lay eyes on. Perfectly seared exterior and perfectly rare inside (they’ll cook it more but only upon firm request), this meal is not for the weak at heart.

Unlike American cows which rarely see their first birthday, these cows can live as long as 18 years, lending an extraordinarily intense flavour and robustness, much like the men who’ve grilled it. Instead of pairing with a big red, I ask for a txakoli, a wine native to this land. It’s high in acidity, fresh and fizzy, and at 11.5% ABV, I can easily finish my steak.

Somewhere between Barcelona and Valencia is Requena, a sleepy village with charming vernacular architecture and an impressive network of underground caves.

Just 40 miles west of the Mediterranean, Requena feels remote, like something important happened here but you don’t know what. Just a few more miles to the southwest and you enter Castilla-La Mancha, the endless arid plateau of fabled Spain to which it historically belonged.

Wedged between the two, Requena has a character and cuisine all its own, known for its hearty reds, stewed meats, aged cheeses and güeña, a cured meat speciality flavoured with pepper, paprika, cinnamon, clove and garlic. I assume position. The güeña is accompanied by morteruelo, the typical regional stew with equal parts rabbit, pork and chicken, spices and dried bread crumbs.

Like the men and women of this land, the meal is powerful, humble and no-frills. I pair with a local red. Before sipping I learn that the bobal grape has been planted here since the 7th century BC. Established in 1957, the Utiel-Requena DO is not often seen on wine lists around Spain, but it certainly should be. Robust, deep fruit and creamy, it’s the perfect crianza to match a hinterland stew.

For those who have never tried sobrassada, I recommend you do so, quickly. Made by curing pork and adding paprika, salt and other spices, it is traditionally encased in a thin layer of pig skin and left hanging.

Across Menorca, the wildest and most enchanting of the Balearic Islands, sobrassadas can be found in shop windows, suspended in garages, inside locals’ houses, basically anywhere you can hang a hook.

I’ve spent lots of time in Menorca. Everytime I go I head straight to Bar Imperi overlooking the handsome town square in Ciutadella on the island’s west coast. Founded 80 years ago they still serve up the best sobrassada sandwiches on the island hands down.

Spread with a knife, sobrassada is buttery, hearty, smooth and nutty. If things couldn’t get any better, local honey is drizzled on top. I wash it down with a ginet, what the Ciutadellencs colloquially call gin with fresh squeezed lemonade served on ice.

The island’s love affair with gin started when the Brits ruled back in the early 1700s. Xoriguer, the local label, is considered the oldest gin made in the Mediterranean with a recipe that dates to the British occupation and distilled in copper alembic stills from the same era. It’s clear and full-bodied and tastes like juniper berries, leaving a clean, peppery finish. Pigs. Honey. Lemons. Gin. So Mediterranean. So good.

Jonathan Lerner is the founder of Tailored Tours – a creative travel studio curating cultural and gastronomic experiences for the well-travelled individual, brands and foundations in Barcelona and beyond.

Join Tailored Tours every Friday through 3 July at 5pm CET / 11am EDT on Instagram Live. Their series The Sips, Smells & Sounds of Spain is an immersive journey of the senses with experts across food, wine and music.

Item 5 – Requena is hardly a sleepy village. Population over 20,000 and a large shopping centre! Has a magnificent castle and old town. Had a happy stay there after visiting the Hoya estate. Would not say either it was between Barcelona and Valencia – actually is beyond Valencia!