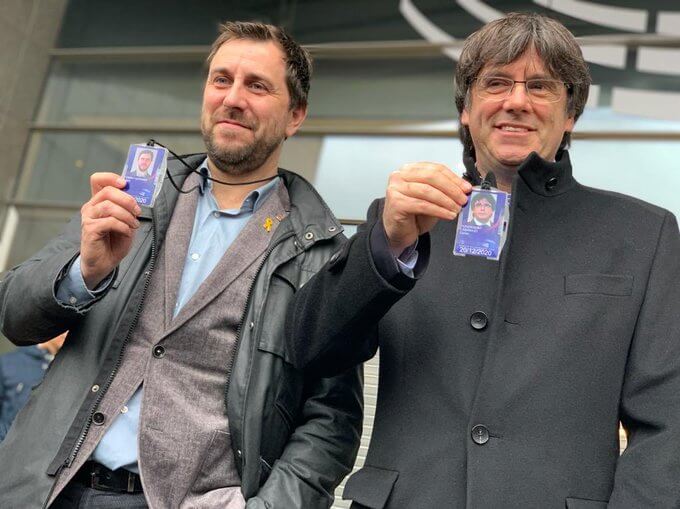 Brussels has suspended the European Arrest Warrants against Carles Puigdemont and Toni Comín, following the parliamentary immunity that they currently have after acquiring provisional accreditation as MEPs.

The arrest warrants have not been rejected outright, but suspended for as long as they have parliamentary immunity.

The processing of the warrants could be reactivated if the Spanish Supreme Court asks the European Parliament to withdraw their immunity, and if that is eventually granted.

Former Catalan president Carles Puigdemont and his former minister Toni Comín both acquired provisional accreditation as MEPs at the European Parliament on Friday 20 December, after the ban on them attending the chamber was lifted.

It followed the ruling by the Court of Justice of the European Union (CJEU) on 19 December that jailed Oriol Junqueras had immunity from the moment he was elected MEP in May. This was later followed on 30 December by Spain’s Attorney General, recommending that Junqueras be freed temporarily to collect his MEP credentials.

Carles Puigdemont tweeted that ‘Belgian justice recognises our immunity and decides to suspend the arrest and extradition warrant!’ He went on to write, ‘but we are still waiting for the release of Junqueras … Spain must act in the same way as Belgium has done and respect the law.’

Belgian justice recognizes our immunity and decides to suspend the arrest and extradition warrant! @toni_comin.
But now we are still waiting for the release of @junqueras, who has the same immunity as us. Spain must act in the same way as Belgium has done and respect the law

Puigdemont and Comín were elected as MEPs alongside Junqueras in May, but none of the three were able to take up their seats. The Luxembourg ruling on Junqueras has an implication on the immunity status of both Puigdemont and Comín, as well as on their extradition hearing that had already been postponed until 3 February in Belgium.

It is Spain’s third attempt to extradite Carles Puigdemont, with the first warrant withdrawn in December 2017, and the second accepted by Germany but only for misuse of funds and not rebellion. However, Madrid did not accept those charges and again ended up withdrawing its European arrest warrant.

The arrest warrant for former Catalan minister Lluís Puig, who is also living in Belgium, has not been suspended. A Belgian judge will review his case on 3 February.

It is also the third time that both Toni Comín and Lluís Puig have faced an extradition request by Spain over their role in the 2017 independence bid.

Belgian authorities had originally rejected the second extradition attempt against Comín, Puig, and also Meritxell Serret in 2018 for an error in the form. Spanish judge Pablo Llarena then withdrew the request against all exiled members of the Catalan government after the German justice system refused to extradite former president Carles Puigdemont for rebellion.

Following the verdicts in the Supreme Court trial and the sentences of up to 13 years for nine former Catalan leaders for sedition and misuse of public funds, the arrest warrants were reissued by Spain.