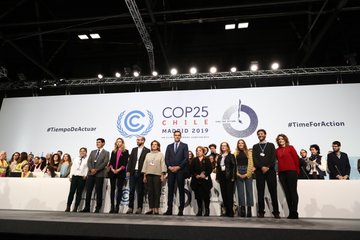 This year’s UN Climate Change Conference, known as COP25, started in Madrid on Monday. The Spanish government offered to host the event after its original host Chile withdrew last month due to riots over economic inequality.

Global leaders, activists and scientists from nearly 200 countries will be attending the two-week event to review and finalise goals set out in the 2015 Paris Agreement. Spanish authorities are expecting some 25,000 participants and 1,500 journalists from around the world.

The United States will be officially out of the Paris agreement on 4 November 2020, a day after a presidential election in which Donald Trump is seeking a second term.

Overshadowing the event this year are failures of past conferences to transform goodwill into real policy change, making the stakes at this year’s event even higher. UN Secretary-General António Guterres has already warned leaders of ‘a point of no return’.

A UN report released this week states that even if greenhouse gas emissions are cut to meet the Paris Agreement levels, global temperatures will rise 3.2 degrees Celsius, exceeding the 1.5 degrees aim of the accord. Such a rise would be insufficient to avert the worst effects of climate change.

This time round, too, conference delegates are being watched by a global climate strike movement, inspired by activist Greta Thunberg, that has now mobilised millions of people across generations and on an unprecedented scale to demand government action.

Ahead of COP25 in Madrid, Spain’s environment minister on Friday blasted the ‘absolutely irresponsible attitude’ of US President Donald Trump‘s administration regarding climate change.

‘We have an absolutely irresponsible attitude on the part of the Trump administration,’ Environment Minister Teresa Ribera said during an interview with Spanish public television.

An attitude which is ‘irresponsible in the eyes of the planet as a whole, because what the world’s biggest economy does… affects us all, but irresponsible as well for the interests of American society,’ she added.

Under Trump’s administration, the US has reversed on its commitment to address global environmental issues, and last month began withdrawing from the Paris Agreement, a major blow to the fight against climate change.

Trump will not be attending COP 25. The US delegation will be led by Democratic Congresswoman and House Speaker Nancy Pelosi.

Brazilian President Jair Bolsonaro will also not be attending. Originally billed to host the UN climate summit this year, Brazil backed out shortly after Bolsonaro’s election. Despite devastating fires and environmental deregulations that have destroyed almost 10,000 square kilometres of the Amazon’s virgin rainforest, Bolsonaro has continued to deny global warming, calling it a Marxist hoax and even appointing climate skeptics to key cabinet posts.