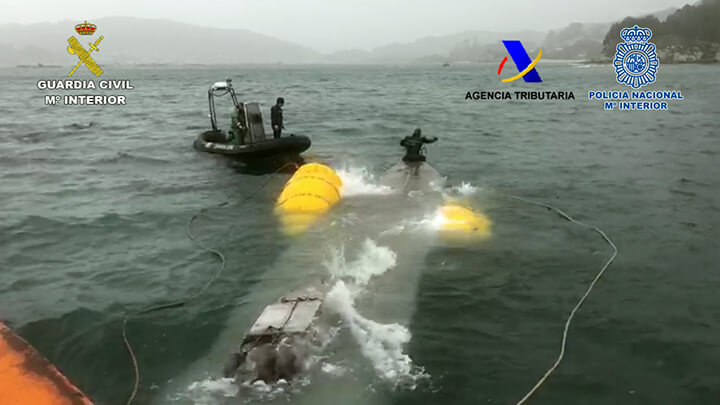 Further details have emerged of the ‘narco-sub’ intercepted by police off the northwestern region of Galicia in Spain – and reportedly carrying around 3,500kg of cocaine worth an estimated €100 million.

Two men from Ecuador who tried to flee the police by swimming ashore were immediately arrested. The police are also hunting a third man, believed to be from Galicia, who was also on the vessel but managed to escape.

The interception of the submarine was a joint operation between Spain’s Guardia Civil, the Spanish National Police, as well as the country’s tax and customs authority, the Agencia Tributaria.

The investigators believe the three men had managed to navigate the custom-built drugs-smuggling vessel across the Atlantic, before trying to sink it along with its cargo as the police closed in.

It has been reported that the Spanish authorities were tipped off about the ‘suspicious’ vessel by their UK and US police counterparts before it was destined to bring its drug cargo ashore. Portugese and Brazilian authorities also took part in the three-day operation to locate and intercept the submarine.

The scale of the operation has reportedly surprised the Spanish investigators.

A police spokesman said, ‘Although the use of submarines is very normal on the American continent, it’s the first time this system of transportation of drugs has been detected in Europe.’

Police believe the 22-metre submarine was built as a single-use vessel in South America, possibly in Colombia, and that it crossed the Atlantic from Guyana or Suriname.

After travelling for over 20 days, the vessel reportedly spent a further seven days waiting at various points for another vessel pick up the drugs cargo, but nobody turned up – possibly due to poor conditions at sea.

The vessel was eventually abandoned and sunk near Hío beach in the Pontevedra province of Galicia, where dozens of police officers where waiting to witness a drug transfer that never happened.

Police divers worked to access the craft before it was removed from the spot where it had been sunk. It was re-floated by the police with the use of balloons before it was transported to a port in Cangas. It was then opened up by officials in the nearby port of Aldan to examine the drugs aboard.

The investigation has now turned to uncovering the origin of the drugs, as well as which organisation in Europe (and possibly in Galicia) was the intended recipient.