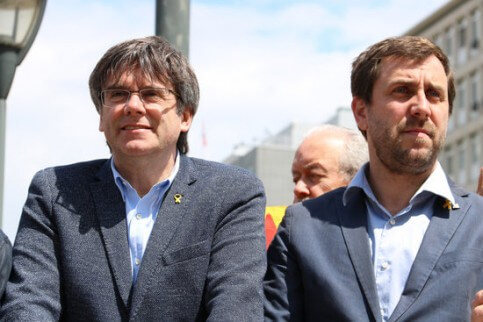 Extradition hearings for the former Catalan president, Carles Puigdemont, together with two of his former ministers, Toni Comín and Lluís Puig, will be held together in Belgium on Monday 16 December.

The three Catalan political leaders are facing possible extradition back to Spain for their role in the 2017 Catalan referendum.

A Brussels judge accepted the defence teams’ request to merge the hearings, thereby unifying the cases of Comín and Puig with that of Puigdemont, and to consider them all in mid-December.

It is the third time that  ministers Comín and Puig have faced an extradition request by Spain over their role in the 2017 independence bid, with the first being withdrawn by the Spanish Supreme Court in December 2017, and the second rejected by Belgium due to ‘procedural defects’ and ‘irregularities’.

Puigdemont is also facing Spain’s third attempt to extradite him, with the first warrant withdrawn in December 2017, and the second accepted by Germany but only for misuse of funds and not rebellion. However, Madrid did not accept those charges and again ended up withdrawing its European arrest warrant.

On 25 November, Comín and Puig’s defence will hand their arguments against the extradition to the Brussels judges, with the public prosecutor doing the same by 5 December.

Their hearing will take place on 16 December, only four days after that of former minister Clara Ponsatí in Scotland.

The Spanish Judiciary has so far not issued any further extradition requests for former minister Meritxell Serret, who is also in Brussels, or former MPs Marta Rovira and Anna Gabriel, who are both in Switzerland.