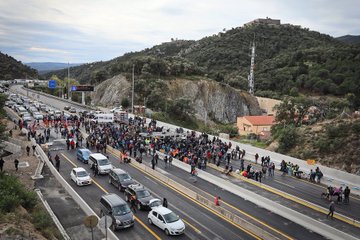 The Catalan pro-independence protest group Tsunami Democràtic has blocked the AP-7 motorway near the French border. It forms part of their protest aimed to ‘call to the international community to make Spain understand that the only way is to sit down and talk.’

The motorway has already been blocked in both directions. The anonymous group of activists have said they have begun a three day protest there, in what they had previously warned would be their ‘most ambitious’ action to date.

A large stage has been erected in the middle of the motorway, whilst a queue of cars currently stretches for 20km.

The protest group claims that cutting the motorway represents a ‘new paradigm’ that puts a ‘new form of peaceful civil disobedience’ on the table. They have also warned Spain that without sitting and talking to resolve the conflict, ‘the isolation will grow larger.’

According to the activists, the Spanish state ‘made it clear’ that if the people put their bodies on the line to defend their rights, Spain ‘will respond with direct police violence against people’.

‘In the action at the Barcelona airport, it was more than clear’, the call to action from the protest group reads. For this reason, the movement proposes changing ‘the body to the vehicle’ – meaning to block the border with cars rather than people, and by being ‘massive, effective and precise’, exercising ‘rights’ and deactivating ‘violent repression’.

Tsunami Democràtic organised the occupation of Barcelona El Prat airport on the day the verdict of the trial of the independence leaders was released, on 14 October.