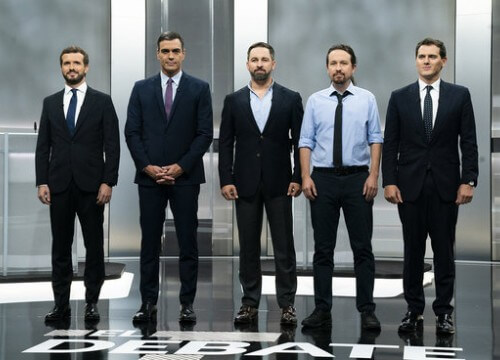 Spanish political parties concluded a short but intensive campaign on Friday in preparation for the country’s general election on Sunday 10 November – the fourth in four years – with acting prime minister Pedro Sánchez, leader of the Socialist (PSOE) party, warning against the rise of the far-right Vox party.

Sánchez also concluded his campaign with a rally in Barcelona, provoking fresh protests from many Catalan pro-independence supporters, and a reflection of how prominent the Catalan issue has been as a campaign topic.

Sánchez’s visit to the Catalan capital was presented by the Socialist party as a sign of its leader’s commitment to addressing the issue if elected again as prime minister. It was the first time that a Spanish prime minister has ended an election campaign in Barcelona.

When Sánchez came to power in the summer of 2018, the support of Catalan pro-independence parties was instrumental in removing the right-wing People’s Party (PP) and its leader Mariano Rajoy from power. Their once-hopeful relationship, however, as Friday’s protests have shown – as well as other protests during October and November – has deteriorated ever since.

Spain has been caught in months of political inertia after an inconclusive April general election, which Pedro Sánchez won but without a majority. Despite a right-wing defeat, Sánchez failed to garner enough support to form a new government – mainly due to his reluctance to agree with the left-wing Podemos party, who are in favour of a referendum in Catalonia and against the imprisonment of independence leaders who backed a unilateral vote in 2017.

Sánchez then called the 10 November election in the hope of drawing a line under all the chaos. But it might backfire. Polls suggest he will again have to depend on other parties – including Podemos and Catalan pro-independence groups – if he is to stay in power.

Towards the end of this election campaign, Sanchez has also been warning against the Vox party’s ‘aggressive ultra-right-wing’ policies, warning they would drag the country back to the dark days of Franco‘s dictatorship.

Vox‘s rise has seen other right-wing groups relinquishing their ‘conservative’ or ‘centre-right’ credentials, and supporting a controversial motion to ban all independence parties in Madrid’s regional parliament.

The Madrid Assembly passed a non-binding motion on Thursday calling on the Spanish government to ban ‘separatist parties that threaten the unity of the nation with the legal tools at their disposal or those deriving from legal reforms they might have passed.’

In a clear reference to the independence bid organised by the Catalan government in 2017, the motion was put before the assembly for the autonomous community of Madrid by the far-right Vox party, and passed with the votes of the right-wing People’s Party (PP) and Ciudadanos (Cs) parties.

The motion also urged the EU to include the pro-independence Committees in Defense of the Republic (CDRs) protest groups on ‘its list of criminal and terrorist organisations’, and included data from the investigation into seven CDR activists arrested on 23 September.

However on Friday, Pedro Sánchez said that his government would be looking into challenging the motion in Spain’s Constitutional Court: ‘We will study the matter, because we’re beginning to witness some very worrying things,’ he said, calling it a ‘very dangerous drift’.

Talking to Cadena Ser radio, Sánchez said that the far-right ‘has a name in European history’, and added that ‘yesterday, we were all very surprised by this matter,’ warning that regional assemblies ‘cannot exceed’ their devolved powers.

Later, in an interview with the main national TVE television channel, the acting prime minister said his government, which has challenged a number of initiatives from the Catalan Parliament, will be ‘just as forceful’ with other assemblies when they pass unlawful resolutions.

When also asked about the matter, Sánchez’s party colleague and head of the Catalan Socialists (PSC), Miquel Iceta, replied that ‘Political problems require political solutions. You can’t turn a blind eye to reality or take those who don’t think like you off the map.’

Polls now suggest that Sunday’s election will end with a result similar to that seen in April, with Sanchez’s PSOE party winning but falling far short of an absolute majority.

Polls have also predicted a surge in support for far-right Vox, fuelled by weeks of protests in Catalonia, some violent, after Spain’s Supreme Court jailed nine of their leaders over a failed 2017 independence bid.

Vox won 24 seats in April, out of the Spanish parliament’s 350 seats, in the first significant showing by a far-right faction since Spain’s return to democracy following the death in 1975 of dictator Franco.

On Sunday, polls suggest that it could double that number.

Launched in 2014, Vox initially struggled to gain traction with its far-right stance, but in the past two years – mainly due to its unbending opposition to Catalan separatists and its hardline stance on Spanish unity – it has gained many supporters.

However, Vox has also come under increasing fire over false claims in its campaign, with more than 2,500 academics and researchers releasing a harshly-worded statement on Friday over its ‘calculated, systemic and recurrent’ use of ‘falsified and manipulated data’. The party has also been criticised for banning journalists from certain media from its official events.

The election in Spain on Sunday could end up prolonging the political paralysis in the country. With no single party able to secure the required 176 seats for a majority, the PSOE might finally be forced to opt for a minority government.