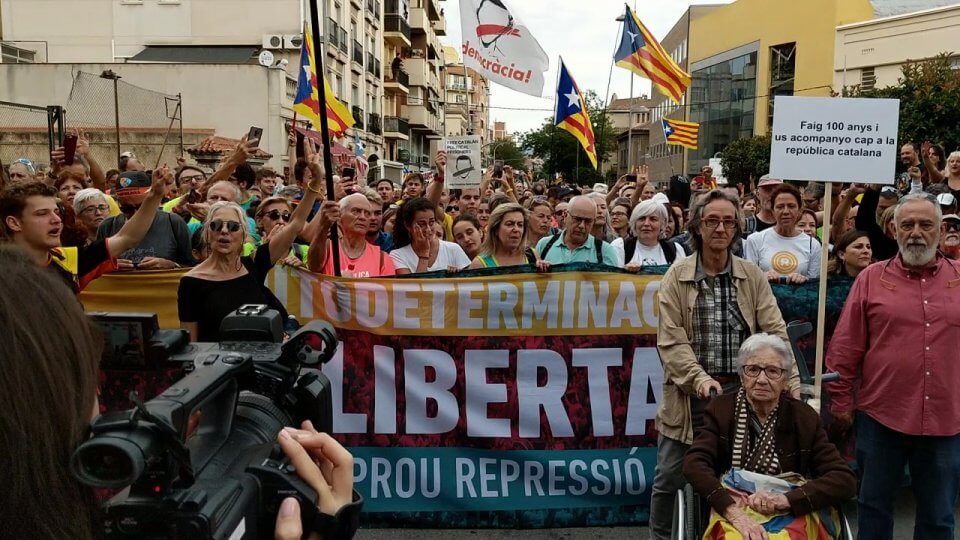 First came the motorbikes, then the bicycles, then a 100-year-old woman in a wheelchair. Finally the massive crowd, one of the five Marches for Freedom that began on Wednesday 16 October, all destined for Barcelona.

The one I observed began in Girona – and I followed it for its final 10km from Badalona on Friday.

A sixth march that began on Friday in Casteldefells was also part of the protest.

When the march reached Badalona at 11.15am, the streets were already packed with people waiting to join it.

There were demonstrators of all ages, but this week there seemed to be a greater share of young people than in previous protests around these issues.

Compared to other demonstrations I’ve seen in Catalonia, very few protestors carried placards, but plenty of Catalan independence flags fluttered above the march.

However, a young woman in Badalona with a placard in English did get up high enough so that it could be seen.

I saw very little sign of a police presence along the march until after it reached Barcelona. Those very few moments were the only ones in which the mood seemed to change from almost festive to angry.

‘Out, out, the occupying forces,’ the crowd would chant along the route.

A couple of times when the march passed apartment buildings close to the highway with one or two Spanish flags on the balconies, the marchers would sing, “Passi-ho be, Passi-ho be, i moltes gracies” (“Bye-bye Spain, bye-bye Spain and thank you very much.”)

Other frequent chants were, ‘The streets will always be ours’, ‘Independence’, ‘Freedom, political prisoners’, ‘October first, we don’t forget, we don’t forgive’ and ‘Spanish press, manipulative’.

As the march proceeded along the C-31 highway, I spoke to Roger Español, a musician who lost his sight in one eye after being hit by a police rubber bullet during the independence referendum on 1 October 2017. He said that police violence was one of the reasons for the demonstrations. He hoped that the day’s protests would also ‘put pressure on the Catalan government to implement the referendum.’

Another chant I heard was, ‘Spanish justice, straight to the street lamp,’ a reference to an event that was part of the Spanish Fiesta National, 12 October, in which a soldier on a glider, flying a large Spanish flag, crashed into a lamp post.

One of the protestors carried a flag that was a blend of the Catalan independence flag, the estelada, and the rainbow flag. And that flag had garnered only positive reaction from his fellow protestors, he told me. Toni, who’s from Masnou, had lived in Canada for a month studying English. He wondered out loud why Spain couldn’t be more like Canada and the UK., which he says are more accepting of their minorities in Quebec and Scotland, and where (legal) referenda had taken place.

For Toni, the march was ‘about civil rights, not about countries or flags.’

At 2pm, still a few kilometres from its final destination, the Jardinets de Gràcia in central Barcelona, the march, seemingly almost en masse, stopped for lunch, for it was that time. Out of backpacks came bocadillos, olives, salads, wine bottles and more.

Whilst there, I spoke to a group of young people from Montgat, who were eating across from us. They had joined the march in their hometown, an hour before Badalona. Mireia Jofra told me: ‘We don’t like what’s happening so we decided to do something, to demonstrate.’ She also said that on the march there were people who are ‘not independentistas but don’t like what’s happening’ – such as the lengthy prison sentences the Catalan politicians and Jordi Cuixart received on Monday.

After lunch, the march continued to central Barcelona, joining up with the ‘freedom marches’ that had begun in Berga and Vic on Wednesday. More and more people kept arriving. The streets around the Jardinets were all packed more than an hour before the concentration that was called for 5pm. The Obelisk Cinq d’Oros, nicknamed ‘The Pencil,’ was the centre-point.

In an attempt to make their voices heard, much more than a half-million protestors had gathered in the Catalan capital, most of them after walking long distances, without a hint of the violence seen on previous nights, or the night to come. Will the government in Madrid listen to this signicant share of the country’s population?

Daniel Schwartz used to write features for CBCNews.ca and before that worked for many years as a TV producer for the Canadian Broadcasting Corporation‘s news department.

Police in spotlight as 58 journalists injured during week